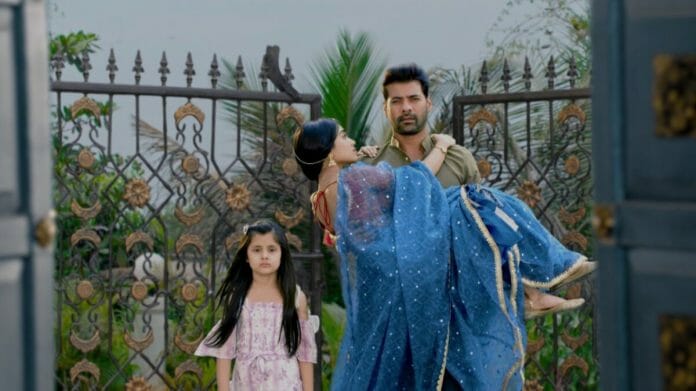 Episode begins with Damini’s goons kidnaps Radha without Mohan’s knowledge. Mohan turns around and checks the car dicky. He wonders that where Radha went and screams her name. On the other hand, Kadambari informs Damini about message. Damini tells her that she didn’t send any message to Mohan. She realises that Gungun must be behind this and moves towards Gungun angrily. Damini’s mother warns Damini about Tulsi’s spirit and asks her to handle Gungun politely.

In the forest, Mohan searches Radha. One of the goon calls Damini and tells her that they kidnapped the child and the call gets disconnected because of the poor network. Radha removes the goon’s mask and sees his face. He picks her and leaves from there. She prays to God for help. She throws her jewels on the way. Meanwhile, Rahul says that Mohan and Radha are not kids and they will return by themselves. Ketki tells him that she is glad that picnic plan got flopped.

Goons decides to make Radha unconscious. Mohan comes there and beat those goons. One of the goon points gun at Mohan. Radha throws stone at that goon. Goon fires the bees nest. Mohan asks Radha to run from there. She notices his injured hand and covers herself and Mohan with her duppata ( Title song plays in the background ). After some time, she tears her duppata and ties it on Mohan’s hand to stop the bleeding. She takes him to the car.

Damini tells her mother that Mohan is not picking the call. Damini’s mother tells her that everything ruined. Damini wonders that why Goon said that he kidnapped the child. Kadambari asks Damini to not worry about Mohan. Rahul tauntingly says that they should contact the police to find Mohan. Kadambari asks him to go inside.

Radha takes the first aid box and treats Mohan’s injury. She says that they should go to the hospital. He tells her that he should keep the bird nest on the tree. She tells him that she will do it and keeps the bird nest on the tree. He sees that and faints which shocks her. She asks him to open his eyes saying that Gungun must be waiting for him.