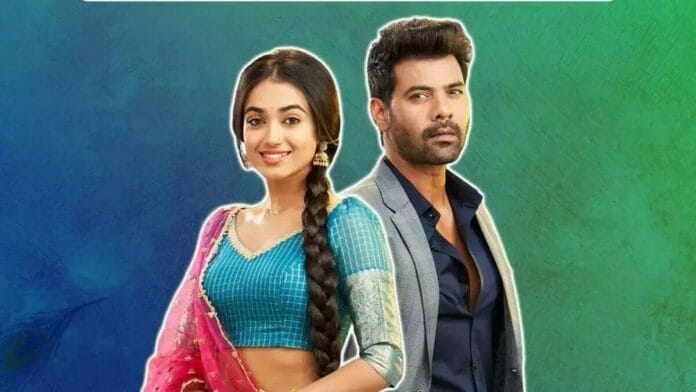 Episode begins with Gungun tells Radha to go to Mohan’s room or else Damini will go to Mohan’s room. Tulsi’s says that Gungun is right because Damini won’t leave a chance to gets close to Mohan. Radha tells Gungun that Mohan will kill her if she went in front of him now then. Gungun drags her to Mohan’s room. She orders her to sleep in Mohan’s room from today. Radha tells her that she is scared. Gungun says that she has to do something because Radha won’t do anything. She pushes Radha inside the room. Mohan’s kurta gets stuck on his head and Radha helps him. He asks her that what is she doing in his room. She struggles to speak. He tells her that leave his room. Gungun tells Radha that the latter also has rights on Mohan’s room. Radha tells Mohan that she also has rights on his room. He asks her that why she came.

On the other hand, Kadambari tells God thatnf she arranged Mohan and Damini’s marriage for Gungun’s sake but that did not happen. She assumes that Mohan and Radha’s marriage is God’s decision. She says that Radha has to prove herself because it’s not easy to become Mohan’s wife.

Mohan goes to Damini’s room. He asks Damini that if she can stay with him in his room. She nods at him and asks him that why he is asking like this suddenly. He lifts  her in his arms and leaves from there. Kaveri smiles seeing that.

Radha wonders that what Mohan is planning to do. Mohan brings Damini there. He tells Radha that he brought his wife to celebrate fight night. He says that Radha can leave the room. Radha recalls that how Tulsi’s spirit warned her about Mohan’s anger. She tells him that she is his wife lawfully and she refuses to leave the room. Damini says that she won’t leave. Radha tells her that she did not tell her to leave. She says that all three of them can stay together in this room. She tells them that she won’t disturb their fight night. She sits on the chair. Mohan and Damini sits on the bed. She gets close to him but he pretends like he don’t have any problem. She hugs him.