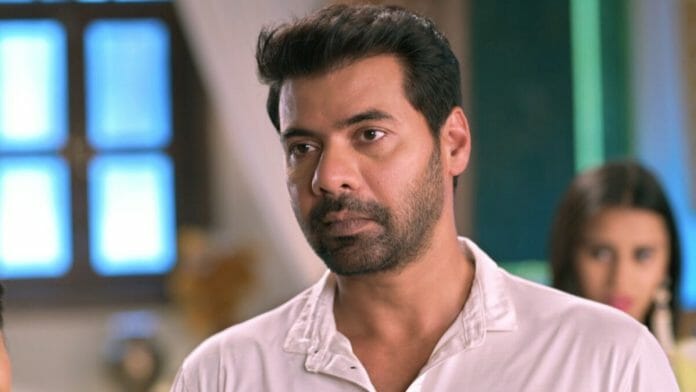 On the other hand, Radha collides with Mohan. He notices vermillion and asks her that if she played holi. She tells him that she was praying and this happened. She wonders that what God wanted to tell her. He thanks her for saving his life and Gungun’s life. He adds that Radha trusted Gungun and made her confess the truth. He says that he thought Gungun won’t change but now he has a hope because of Radha. He tells her that she changed him too and she deserves a gift for that. He asks her to bring her English books so he can teach her and leaves from there. She enters her room. Damini and her mother sees everything. Damini’s mother tells Damini that Tulsi’s spirit is not danger but Radha because Radha can take pheres with Mohan.

Radha comes out of her room with books. Damini stops her. Radha notices Damini’s head injury and gets worried. Damini hugs her. Damini’s mother thinks that Damini become mad. Damini tells Radha that she gets sister feeling from the latter. She adds that her marriage going to happen because of Radha. Radha tells her that she is happy in her happiness. Damini tells her that the latter must be missing her family. Damini’s mother understands Damini’s plan.

Damini asks Radha to return to her house. Damini’s mother agrees with her. Damini asks Radha to come to attend the marriage. She takes the books from Radha and tells her that it’s not her age to learn English. She adds that Radha is good the way she is and tomorrow the latter can leave the house. Radha nods at her and goes to her room. Damini’s mother praises Damini.

Next day, Radha packs her luggage. She says that she has not finished her work yet but she has to leave the house. Meanwhile, Mohan tells Gungun that he want to talk to her. He tells her that Damini will become a good mother. She tells him that she is bored of listening this and Radha too tells the same thing. She adds that Damini can’t become her mother. He tells her that he is going to marry so she can get a mother. She asks him that what he will do if she opposes this marriage then.