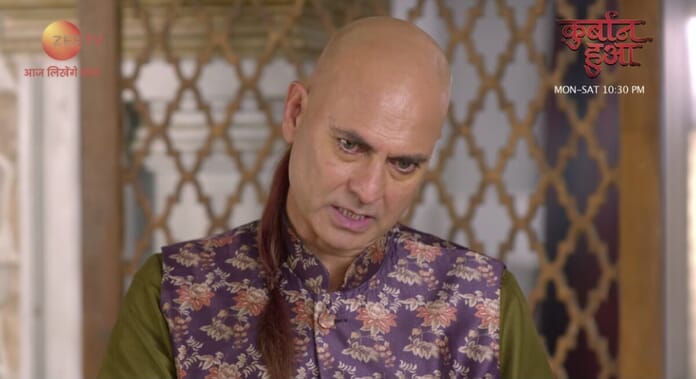 This show is turning out to be something else only. Every episode has something new to show the audience. The audience can only guess what is going to be in the next episode and even if they make all the guesses, the makers come out with something else only.
Every episode is fresh with Content, with loads and loads of drama, emotion and story. Every character is panning out really well. Every character is being brought up to the centre stage. This is not at all a typical daily soap that can be termed as boring.
Chahat thinks of the New stranger as a plumber and gives him the tap to repair. When he tried to wipe his hands with her clothes, that is when she sees him and asked for his identity as he did not look like a plumber. Alaknanda walks in and introduces him as Srikant, the man she is going to marry.
Every other member too joined them and Alaknanda introduced him to everyone. Vyasji asked him to recite eight names of Lord Shiva, which he did and recited some more names as well. Vyasji got really impressed and blessed him.

Srikant then told everyone that his favourite name of Lord Shiva is Neelkanth and in a way Srikant too is Shiva’s name.
Everyone sat in the drawing room to talk to Srikant. He said that his parents died seven years ago. He lives in Austria and manages the business there. He even tried to show Neelkanth his fake website when Neel tried to search it on the web.
Srikant said to himself that all that he is doing is for Chahat and everything else he is doing is just a plan. Vyasji then took some important decisions. He said that he will give half of his properties to Alaknanda and this was said so that Dua doesn’t leave the house and can stay with Chahat.

Chahat understood this decision and thanked Vyasji. Vyasji later said that he wants Srikant and Alaknanda to stay in Devprayag only. Srikant agreed with everything.
Srikant put a bangle in Chahat’s hand saying that he was just checking the size for Alaknanda. Mami tried to take out the bangle but only Neel Succeeded in it. Srikant later planned a dinner for everyone.

He put some oil on stairs and Mami fell on stairs. She did not get badly hurt and Chahat stayed back with her. Srikant then made a fake call to Neel to keep him away from the house. Srikant sent the rest of members for dinner and himself stayed back at the house. He cut the power off to stay close to Chahat.

So this is what happened in today’s episode. Will Alaknanda really take Dua to Austria? Will Alaknanda really get married? Why does Srikant want to win back Chahat? How did she leave him before? What will happen now in the house since Neel and the members are not there? How will Chahat tackle Srikant and his advancements? There are a lot of questions to answer.
To find all the answers keep watching Qurbaan Hua.