The episode starts with Krishna getting Radha ready for the meet. Krishna tells her that a queen or a king is decided by their deeds, so take proper decisions.

While leaving, Meets her father who again tells her to ponder over her decisions, this is also repeated by Ayan, but to all of this Radha says that her decision is final and beneficial for the people.

In the gathering, she announces to the people that they are not going to leave barsana at any cost as it is their motherland and will fight with whomsoever they have to and at every cost. She also says that when warriors like Krishna and Balram are present then there is no need to get scared.

Ayan gets more furious on hearing this. Ayan’s sister intervenes and says that how will Krishna be able to save barsana when he himself is the root cause of the problem. Jarasandh is attacking barsana only because he wants to attack Krishna and he has no other reason to attack the place. She further continues that if Krishna is not in barsana people will get safe automatically and then Jarasandh will not attack.

Ayan too supports his sister in this matter which also gets consent from Radha’s father. He too believes that Krishna’s stay in barsana is going to affect the lives of people. The people of barsana too support this decision and shout that Krishna must leave the place. Radha is in utter tensed situation as to what to do in such situation. Krishna stands there smiling to all of this happening.

Radha remembers the time when Krishna told her to take the best decisions fir the people even in his absence. Radha finally decides to allow Krishna and Balram to be sent away from barsana so that the attack could be avoided. This comes as a relief for some.

Here jarasandh is ready for his move towards barsana when he is stopped by his army leader who tells him that he shouldn’t go for such a small attack and on such a small person. It will be a thing of shame dor Jarasandh. He realizes it and sends the army alone with the leader.

Maharaja Ugrasen is tensed again but agrees with the letter. Krishna and balram stand upon a hilltop and look at the ascending army of jarasandh. They then talk about Radha’s decision and how it is going to be their final time in barsana and after that any thing will not be able to bring them back to the place. Balram is saddened on hearing this. Krishna says that they have to embark on a new journey in their life.

Here Rukmini is sitting all tensed and crying about the attack in barsana and on Krishna. Her brother Rukmi then appears before her and tells her that Jarasandh is going to kill Krishna by the next day. Rukmini is aghast on hearing this.

Rukmi further says that Jarasandh has also arranged for her swayamvar the next day to which Rukmini rejects and says that she loves Krishna and will not participate in the swayamvar. Rukmi mocks her blind love as she hasn’t ever even seen Krishna to which she replies that love does not need anything, but feelings. She will only marry Krishna and nobody else.

Krishna is bidding final adieu to his mother and father. She tells him that she always felt in her heart that he is going to be the person who will change the world and the world will remember him forever. 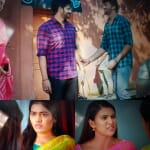 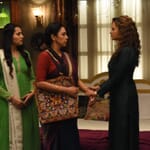