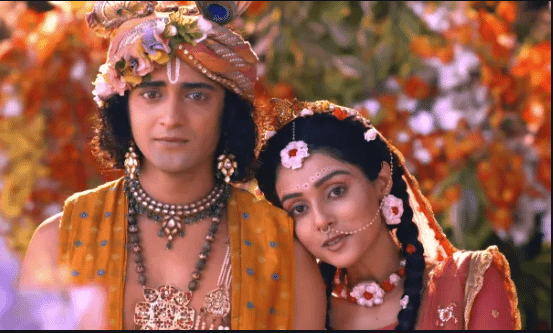 Episode begins with Krishna tells all the gods of Swarglok that he is looking for a company for him for his new journey and finding out the actual one will take a good amount of time. The next morning both the brothers are standing in front of his state Dwarka with his elder brother Balram. He says to him that the time has come to start the journey for this new chapter of revolution.

Balram says to him but it is time consuming which can take up to years then who will take care of Dwarka in the meantime? Krishna says that Dwarka lives in my heart and a part of me will always stay at Dwarka. Balram gets assured and both of them start their journey when Krishna says that even Radha has to go through a huge trouble in her upcoming days of life.

Radha reached her place with Ayan and kutila but unfortunately she was welcomed with sour minds. She tries to talk to the people but none of them reciprocates in the same manner. Everyone blamed her for being in an inappropriate relationship with Krishna being a married wife of Ayan. Radha tries to make them understand that the relationship between her and Krishna is pure and pious .

However, a shrinked mind won’t be able to see it or realise it. Only if you broaden your thought process and point of views then you will be able to see what I am trying to say because everyone knows neither I have said wrong ever nor did anything which can be hurtful to people or anyone for that matter. however nobody is ready to listen to her words and iron gives her time to accept her fault in front of everybody that she is in a relationship with Krishna in a bad way.

Kutila says to Ayan, why do you gave her one day time, we have trapped her and can give her punishment right away. Ayan says I want to take revenge from her for every single pain that she caused me. Krishna can foresee anything and he says anger and the feeling of revenge demolishes the person first who is seeking it. These things need to be understood first, not only by you but for Duryodhan too. Krishna says to Balram that they will reach Panchal state first as there is something big going to happen which will have its own significance in this entire flow of incidents.

Balram says to Krishna since I am also with you in this journey, it’s evident that I have some role to play as well. Krishna says if I ever feel weak at any moment then may be I will need your power and strength with me to survive that. They have almost reached the border of Panchal when Krishna asks Balram to stop the cart as he wants to meet someone.

Precap – Krishna meets Kunti and her sons in a disguise and let them know about Panchal and Draupadi.