Episode begins with Krishna gets down from the cart in the middle of the forest to meet someone close to him. Balram says who can be your close person in this middle area of a jungle. He insisted to come along with Krishna but he says they are my relatives then what will you do there? Balram gets confused with his words and agrees without thinking about it. Krishna promises him to be back as soon as possible.

Later on, Balram realised that they are brothers, hence their relatives are same and he understands that Krishna did it for his own purposefully. He thinks what is Krishna upto now and waits for him there. Kunti is here praying from the god of Sun when her sons appeared at her doorsteps and expressed their honour for her. She gets happy to see them and asks them to wash their hands and face and meanwhile she will arrange for the food. She asks them to distribute whatever they got among each other equally.

Krishna comes there and tells Kunti you need to acquire full knowledge about anything before giving any judgement over it. Kunti doesn’t get to understand the gravity of his statement. Bhim gets angry with Krishna for talking to his mother like this. Krishna introduces himself as a businessman who came from a far land. He is tired and hungry and that’s why he walks up to this house of Brahmins so that he doesn’t need to worry about his food, water and shelter.

Bhim was not convinced by his words at first but then Yuddhistor stopped him and says it is a norm to take care of your guests like god. All the sons of Kunti are taking care of him except Arjun as he is trying to notice Krishna properly. Later Kunti summons Krishna for the food and she asks the reason behind his saying to her. He says the most of the hurdles one faces in life is due to their lack of care and precautions over their actions and assessment about things.

Before asking your sons to distribute things equally first see, understand and evaluate what it is or else it can be a huge problem. Kunti can guess there is a sly warning in his words for her as if she is going to do something blunder in near future which will have a huge impact on the entire country. She gets worried a bit but Krishna changes the topic by asking her for some sweets. Later, Krishna and Arjun are talking to each other when Krishna informs him and the rest of the brothers about their characteristics are being of a royal family heirs and fighters and not of a brahmin.

Arjun gets impressed with Krishna and introduces himself as Parth to him and Krishna says his name ie Madhav. He tells Arjun about the Kampilya and the tales about Draupadi and he gets mesmerized to know about her.

Precap – Bhim says none of us will take part in the swayambhar. Draupafi welcomes Krishna at Panchal palace. Radha is missing Krishna and he feels that. 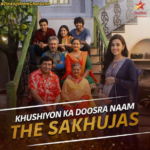