Episode begins with Krishna asking Arjun to fulfill his responsibility with dedication and determination because it is always important to you concentrate on that particular thing at that moment which is necessary. Arjun listens to him carefully and says that I will definitely think and rethink all the aspects and angles before taking the final call. Krishna says everybody has some expectations from you because you are will get to them and so as I.

Arjun get happy to hear all this and he said that right now you please take rest and I am sending food for you and after a while I will meet you. Krishna smiles at him and nodes his head for a positive feedback. Dropadi is welcomed in the Rani Mahal of Hastinapur. Gandhari is showering her love on her and says that all these jewelries and ornaments are for you. She says you are the first daughter in law of this generation.

Draupadi gets over 12 see the love and admiration for her and she says to them that I will try my best to keep up the expectations of all of you and this family from me. they are being called for lunch and property is asking for Arjun when Bheem says that you don’t need to think about Arjun much as he is favourite of all the people and all of them was feeding him a good amount of food right now. Arjun is with Bhishma and he is offering him so much of food that he is saying, ” I will be unable to eat all this”. Bhisma says these are arranged for you and you have to accept all of these.

Later on Duryodhan and Shakuni had a conflict among each other regarding the event. He was asking him why did you also step back at that time when Shakuni says I have to do it because Pandavas, Bhisma, Dronacharya are great warriors and they are the real protectors of Hastinapur and we can not afford to lose them at any cost.

If King Dhritarashtra would have announced your name then he will be taken as wrong in everyone’s eyes which will be not in our favour. Later on, Krishna comes in the room of Pandavas and he gave all of them the learning of the ability to pick the right and also respect of a difference of opinion.

Precap – Arjun asks Krishna to show him the right path. 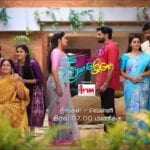