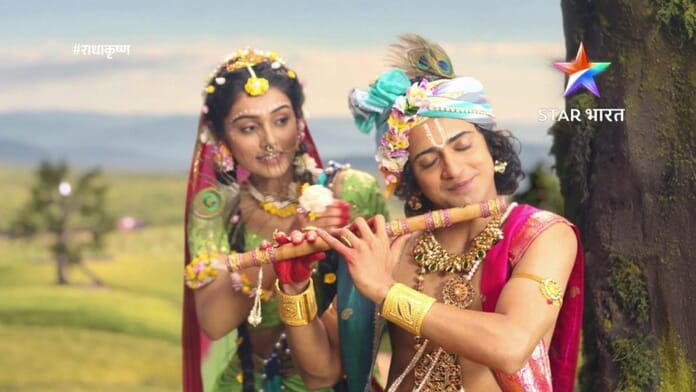 Krishn tells his plan that when Sudevi will gain conciousness, Sudhama will ask for a dance programe. Meanwhile when everyone asks Sudevi to rest he will abduct Sudevi and Bhairav and leave them beyond the border. Ayan hears them and tells it to Radha and Balram. Balram tells that they need to plan something huge now and they cannot even tell elders as it will be an insult to their place. Radha makes a plan to stop Krishn.

Jatila hides the half coin when Vrishbhan’s agent come for inspection. Radha then asks that as the marriage is organised by Gokul ans Barsana, why should the people of Barsana only dance. She then urges the boys of Gokul to dance with them. Balram proposes that Krishn should dance with them. Krishn tells them that he cannot dance and request Radha , but she rejects his pleade. Krishn then asks Ayan that he will dance with due permission of Ayan. Ayan agrees.

Radha is stunned seein Krishn play the flute. She starts dancing on the beats of his flute. They both get lost in music. Ayan foows Bhairav . The groom gets up and is followed by Krishn’s friends. Balram witnesses this magical moment. The full moon appaers which denotes that they are ready to play on music.

Lord Krishn says that fear is of the future is not a necessary thing . Future which no onw is aware of needs not to be feared but to be faced. The time which has not yet arrived has no sense to be feared off. Instead one can have cinfidence on their deeds which will make them fearless and face whatever comes on their path in future .