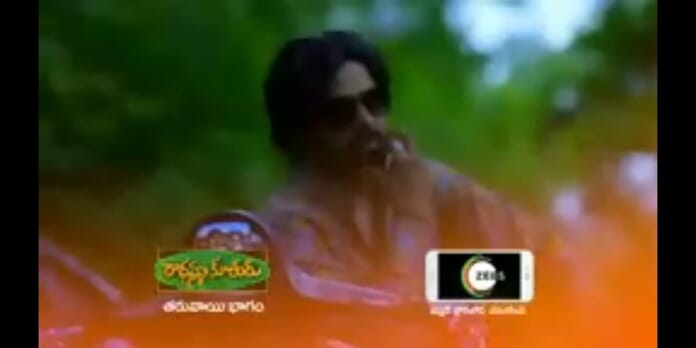 Zee TV’s popular hit show Radhamma Kuthuru is all set to engage it’s audience with it’s interesting story line. The twists and turns in the show keeps the viewers hooked to their Television. In the yesterday’s episode we saw Bujjamma shouting at Aparna for making her son make the coffee for her. Aparna denies the claims but she keeps on accusing her. Arvind, Radhamma, Rajesh and Akshara come there. They tell her that she took care of Rajesh whole night that even they are shocked. Arvind convinces her by saying how her anger stays for just sometime. Shruti sitting on the steps infront of her house when few Mahila mandal ladies come there holding boards in their hands asking justice for Shruti. Shruti pulls Aparna’s hair and asks her whether she got only her husband. She slaps her but Rajesh comes in the middle and he gets the slap. Rajesh looks at her in anger while Shruti looks at him shocked. Everyone from the family comes there ahd tells them about Shruti. Akshara asks Shruti whether they should go to jail now. She denies. The ladies commission scolds her ahd leaves from there in anger after warning her not to come infront of them. Shruti provokes Bujjamma that they will never give her a heir.

In the today’s episode we will get to see Akshara telling Aparna not to think about it. Aparna gets up from the bed with tears and tells to Arvind, Akshara ahd Radhamma that every woman dreams about her life even she has done the same. If she says anything in anger they tell her not to say so and asks her to adjust which they are doing from the childhood. In childhood only mother used to come to the parents meeting and when asked about father, she was asked to adjust. And now they are asking her to adjust her with her life and the sudden change but where is the time. Akshara looks at her sadly. Aparna tells her that the moment they wake up it is obly arguments and fights in the house. There is no peace. She tells them that she can’t take this anymore and bear this torture anymore. Akshara asks her to not to say that and tells her that there is no loss for her. Aparna thinks that she can’t let this go and should leave from there hence asks her as to where is the peace firhet about loss. She says that Shruti has challenged to come back again and she will only stay with him and follow her Marriage if they get Shruti divorced with Rajesh. She leaves from there thinking that Shruti will never give him the divorce.

In the upcoming episodes we will see Akshara telling to Arvind that so now they should make Shruti herself divorce Rajesh. Arvind agrees and says that they should plan something which will make her divorce him. Akshara says that for that plan they need someone new. Arvind thinks for sometime and says that they have a person who is dying to become an actor and is trying to get roles but not getting them, he is roaming from Vishakapatnam to Hyderabad. A man comes on a bike.