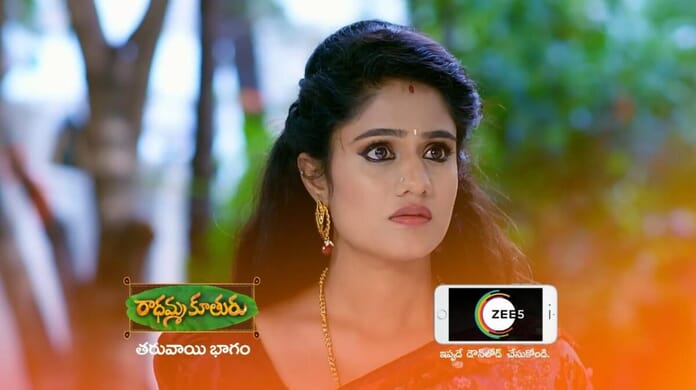 Zee TV’s popular hit show Radhamma Kuthuru is all set to engage it’s audience with it’s an interesting storyline. The twists and turns in the show keep the viewers hooked to their Television. In yesterday’s episode, we saw Aparna and Rajesh completing the rituals. Pandit asks Aparna and Rajesh to complete seven steps ritual as well by walking around the temple. Shruti is with her friends who tell her to look at Rajesh and Aparna. They say seems like they are getting closer to which Shruti says she won’t let it happen and will separate them.

Akshara who hears this, tells her that she can’t come into Rajesh’s life and asks her to be careful. Her friends says that she is warning her to which Shruti says that it would have been better if Akshara was dead instead of her Mother in law. Rajesh hears this. Her friends asks her whether she was the one to kill to which she says yes. Rajesh shouts her name and chases her with a Trishul to kill her after slapping her multiple times. He brings her to a Graveyard.

In the today’s episode we will get to see Rajesh dragging Shruti into the graveyard. He tells her that he vowed to kill his Mother’s murdered in the graveyard. He ties her hands, places sticks around her body and brings fire to burn her. But before he could burn her, Akshara and Arvind come on time and manage to stop him. Later Raghavendra seeks permission to take Purandhari to his house. The family agrees.

In the upcoming episodes we will see Bebamma asking them whether they have come in a right way. She asks Bujjama for Purandhari’s share of Property. Bujjama says that she has invested the money and if they come to know that she is sharing then they will take their money back. Bebamma says that she won’t accept her inside her house without her share of Property making them shocked.

What will Bujjamma do? How will Akshara solves this problem?