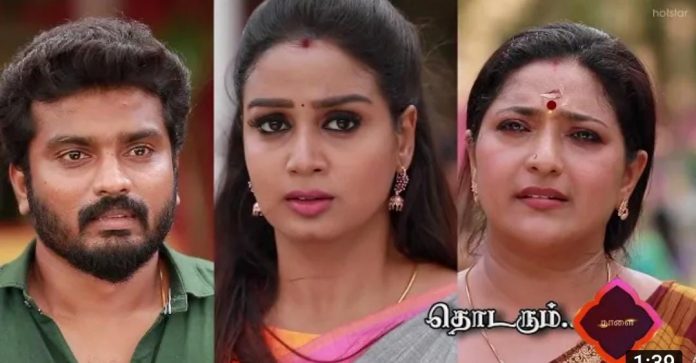 In the previous episode we saw; Sivagami and her family members visited the priest Madam.

Adhi feared Jessy may found him out with his family members. He tried his best to avoid meeting priest but Sivagami was adamant in her decision. Meanwhile Sandhya and her friends met Saravanan there. They congratulated him for his wife scored high score. He assured to give treat to them for her victory. They teased Saravanan.

Later Adhi searched for Jessy in institution. Meanwhile Sivagami and her family met the priest. Priest planned to get money from her family. He narrated to them whatever happened in her family using Archana’s confession.

In the upcoming episode viewers will see; Sivagami will get impress by his prediction. Adhi will notice that Jessy talking with his brother and Sandhya. He will doubt how come they know each other? Later Sivagami and family members will spot Saravanan and Sandhya in coaching institution.

What will happen next? Will Sandhya prove Priest is fraud? How will Sandhya retain her institution?