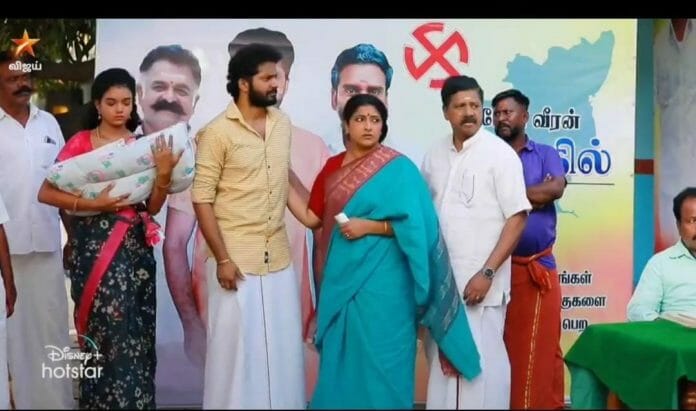 In the previous episode we saw; Adhi got money from his friend. He revealed to him it’s a black money. He wanted to exchange it in bank. Meanwhile, Jessy met her parents in beauty parlour and learnt from them Adhi brought money from them. She check his cupboard and found money in it. She inquired him about it.

Adhi slapped her for questioning him. Sivagami heard the sound and confronted Jessy. Jessy lied to her that suitcase fell down. She lied there not to create a new issue.

Later, Paranthaman made merchants drink and demand them to vote for him. Saravanan’s supporters show the video to Saravanan and asked him to do something.

He gave extra money to cable operator and ask him to record his video. He revealed Paranthaman plan to everyone through cable channel. Merchants wives watched it and fumes. Sandhya was be surprised to see Saravanan’s new trick.

In the upcoming episode viewers will see; Sandhya will appreciate Saravanan’s idea. She will motivate him to win the election. Later, Archana will wish best of luck to Senthil and assure him that he will win the election.

Archana will demand Sivagami to bless her son. Sivagami will pray for them but refused to bless both of them. Later, Sandhya will call Saravanan to encourage him. Gauri will overhear Sandhya’s conversation with Jyothi.

Later, Senthil will ask Sivagami to vote for him. At the end Saravanan will win the election
What will happen next?

Will Sandhya become a IPS? When will Archana’s truth come out?