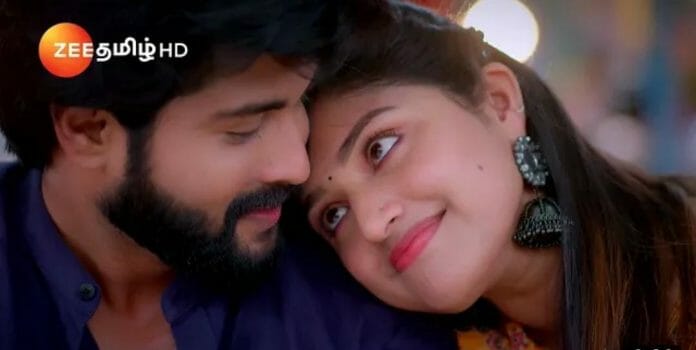 Rajini and Anbe Shivam are super hit shows of Zee Tamil. To entertain the audience both shows brings Super sangamam. Now story focusing on both Rajini to accept Parthiban’s love

In previous episode we saw; Radhika met Arasi and appreciated her boldness. Radhika introduced herself to her. Arasi said to her she noticed her disappointed with Rajini. Radhika said that everyone got disappointed after her entry.
Both Arasi shared their respective intention with each other. They decided to join hands against Rajini-Parthiban and Anbu-Shivam. Radhika advised Arasi to walk on the burning coal for her daughter to win Shivam and his family’s heart. Arasi did so. Anbu doubted her intention. She pretended to faint. Shivam catched her. Shivam aided Arasi and looked after her. Anbu burned in jealousy watching this.

In the upcoming episode viewers will see; Parthiban will share to Rajini that he is happy at least she lied to him that she has feelings on him. Rajini will question him whom lied to him? She will confess her love on him make him feel on cloud nine. Rajini will share to him that she wanna lay on his shoulder and held her head on his shoulder. Parthiban will get happy tears.

What will happen next? Will Anitha accept Parthiban’s love on Rajini? When will Anbu reveals Arasi’s true intention to all?