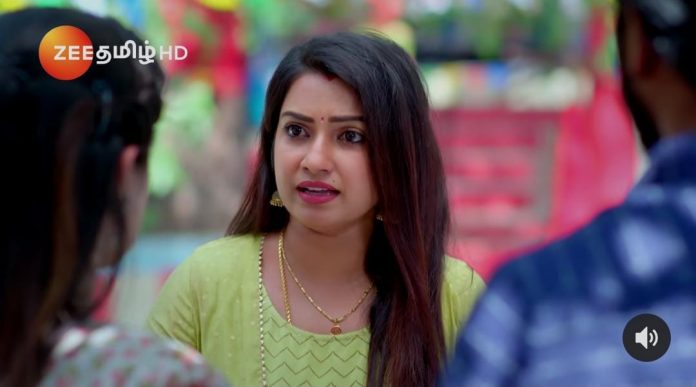 Zee Tamil’s famous show Rajini’s viewers witnessed Rajini’s love confession for Parthiban. Ahead Viwers are going to see the obstacles Parthiban and Rajini going to face in their love Journey. It will be interesting to see how they both are going to overcome all problems and tie knot.

Previously it was seen that Radhika framed Parthiban. The village court declared Parthiban and announced punishment. However Rajini saved Parthiban saying that she called him to meet secretly as she loves him which shocked Rajini’s family. The latter tried to oust Parthiban before the festival, but Rajini stood by Parthiban said and fought with her family.

Radhika called Anita and informed her about Rajini and Parthiban love affair. A furious Anita slapped Rajini and dragged Parthiban. Meanwhile Selvi tricked Divya and got her married to her son, Anand secretly. Selvi manipulated Divya and convinced her to keep her marriage secretly until she would become collector.

In the upcoming episode it will be seen that Divya will ask her parents why they’re against Rajini and Parthiban love affair to which they will say that Parthiban isn’t a suitable match for Rajini. They will decide to find another match for Rajini. The latter will hear this, but will leave without reacting. Meanwhile Anita will bring Parthiban home and will inform their parents about Parthiban loving a girl and that girl is none another than Rajini.

Parthiban and Anita parents will get glad knowing this. However Anita will strongly oppose Parthiban and Rajini love affair and will threaten Parthiban to cut all ties with him.

What will happen next? Will Rajini and Parthiban be able to convince their respective families?

Stay tuned to this page for latest update of your favorite Tamil shows.