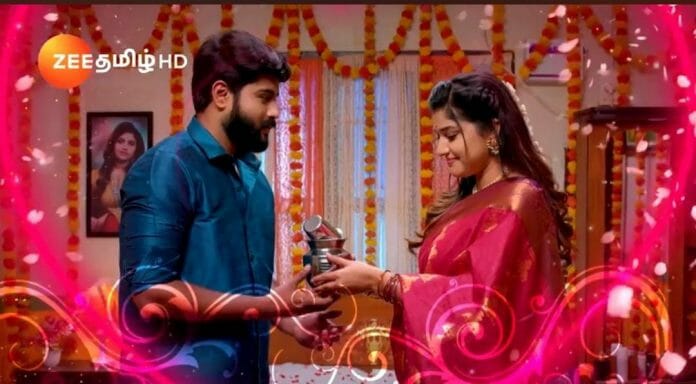 Zee Tamil popular show Rajini has unique story line. This show is about Rajini’s selfless sacrifice for her family. Now serial focusing on Rajini to stand for Parthiban

In the previous episode we saw; Radhika got frustrated seeing Rajini and Parthiban together and called someone in anger. Parthiban got surprised seeing Rajini in sarie. Parthiban dreamt like romancing with Rajini. Rajini entered inside giving surprise to him. Both hesitated to open up their feelings to each other.

Parthiban irritated Rajini to make her laugh. Anitha reached there and create a scene there. Parthiban scold Anitha for creating unnecessary issues there. Parthiban complained that she was ruining his peace. Anitha said to him that she doesn’t care about him anymore.

In the upcoming episode viewers will see; Anitha will reveal to Rajini that Parthiban brought 25 lakhs from her. He promised to leave Rajini for it. She will demand him to pay the money. Rajini will clear with her that Parthiban did it for her so she will repay it for him.

Anitha will deny it. But Rajini will be adamant to repay his debt. Later, Rajini will scold Parthiban for promised to her. Radhika will try to create a misunderstanding between them but Parthiban give a fitting reply to her.