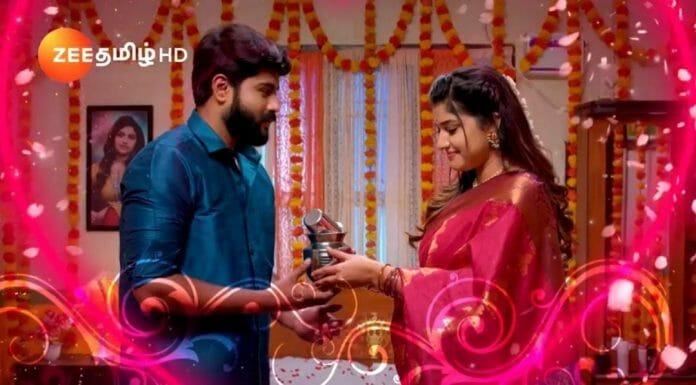 Zee Tamil popular show Rajini has unique story line. This show is about Rajini’s selfless sacrifice for her family. Now serial focusing on Rajini to confess her feelings to Parthiban

Radhika got furious seeing it. She planned to stop their first night at any cost. Meanwhile, Ranjitham and Padma helped Rajini to get ready and advise her to follow their tradition. Rajini hesitated to express her thoughts to them. She sent her inside giving a glas of milk. Radhika got frustrated and called someone in anger. Parthiban got surprised seeing Rajini in sarie.

In the upcoming episode viewers will see; Parthiban will dream like romancing with Rajini. Rajini will enter inside giving surprise to him. Both will hesitate to open up their feelings to each other.

Parthiban will immitate Rajini to make her laugh. Anitha will reach there and create a scene there. Parthiban will scold Anitha for creating unnecessary issues there.

What will happen next? Will Rajini forgive Parthiban?