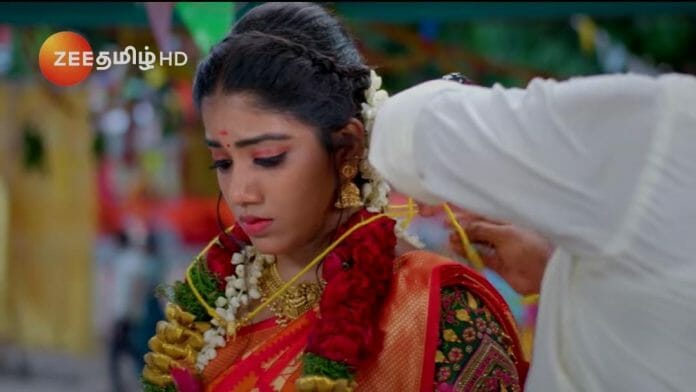 In today episode it’s seen that Radika trapped Parthiban. She texted him from Rajini’s phone and called him to a location in the night. A girl shouted when Parthiban arrived there. Crowd gathered there. The girl accused Parthiban of trying to misbehave with her. The villagers beat Parthiban on believing the girl. The next day the villagers arranged for a meeting to discuss the allegations put on Parthiban. The elders of the village questioned Parthiban why he had came to that place in the night.

Parthiban didn’t reveal about Rajini’s message as he didn’t want to defame her. However this turned against him. Villagers declared Parthiban guilty and announced his punishment. Parthiban was about to get punished. Shivam and his friends made entry. Shivam argued in favor of Parthiban and proved that the girl lied. But still villagers demanded to know why Parthiban came to that place in the late night. Ranjini came and told that she called him there.

In the upcoming episode it will be seen that Selvi will trick Diviya and will get her married to her son. Baskar will kidnap Iniya. Anbu will shoot Baskar to save Iniya. Anita will ask Rajini if she loves Parthiban to which Rajini will say yes. A furious Anita will slap Rajini and will take Parthiban from there.

What will happen next? Will Anbu get arrested for shooting Baskar? Can Rajini convince Anita?