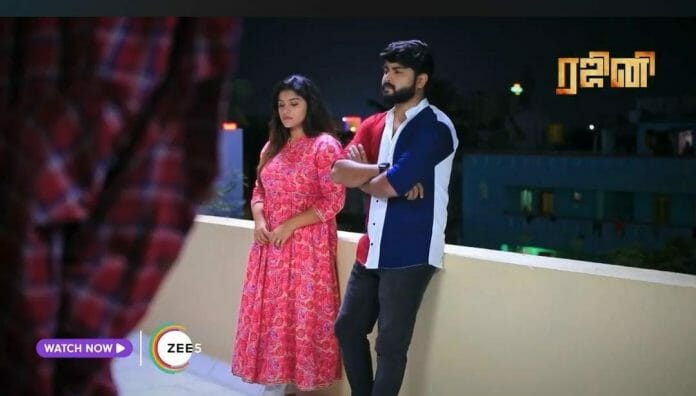 Zee Tamil popular show Rajini has unique story line. This show is about Rajini’s selfless sacrifice for her family. Now serial focusing on Rajini will be in a Dilemma

In the previous episode we saw; Radhika asked Raghavi doesn’t Parthiban insulted her in front of everyone? He rejected her and married Rajini. Still he was loving Rajini not her. But Raghavi was adamant to marry him.

Raghavi shared to her that she doesn’t have any feelings on Parthiban. She wanted to marry him to take revenge on him. Because of him, her parents faced humiliation. He betrayed her and married Rajini. She wished to trap him and send him to jail. But he escaped from it.

Later, Anitha lashed out at Rajini for wearing the nuptial chain. Rajini tried to convince her. Radhika interrupted them to get a good impression from Rajini. Ranjitham asked Rajini to don’t divorce Parthiban.

In the upcoming episode viewers will see; Parthiban will demand Rajini to answer his questions. Rajini will share with him that their relationship will end tomorrow in court.

Parthiban will say to Rajini that she knew well that he won’t lead a happy life with Raghavi. Even Anitha and Raghavi aware of it. Rajini will clear to him that she doesn’t know what to do next? She want to leave from his life to protect him.