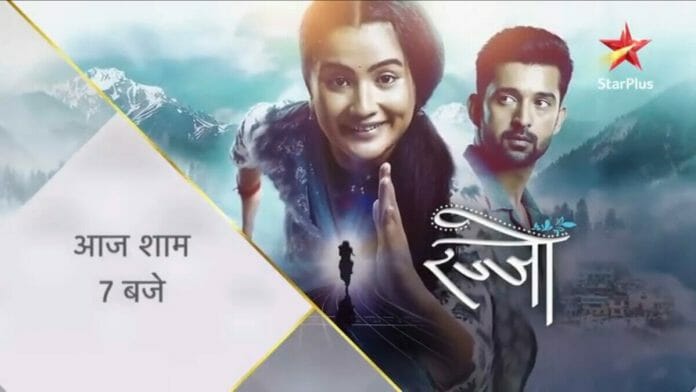 Pushkar introduced Manorama to Arjun and his family. He boasted about finding Manorama. Arjun was about to take Manorama to meet Rajjo. Pushkar stopped Arjun. He manipulated Arjun that Rajjo couldn’t bear any shock in her current health condition and her health could worsen if she would meet Manorama.

He indirectly forced Manorama to accept his decision. Arjun promised Manorama to protect Rajjo. Arjun took the scarf from Manorama so that Rajjo could feel her presence through that scarf. Rajjo gained consciousness and learned about her mom’s presence by finding a piece of broken bangle of her mother hanging in the scarf.

She urged Arjun to tell if her mom has come. Arjun told Rajjo that her mom had been found and she is downstairs. Rajjo ran to find her mom. She saw her leaving in a car. She ran after the car.

Pushkar planned to send Rajjo and Manorama immediately to their village. Manorama rejected Pushkar’s help. Arjun stopped Rajjo from going back to Neeltaal, stating that she was injured. He took Manorama and Rajjo back to his house while Pushkar fumed in a rage.

Madhu got alerted by Kalindi about Arjun’s actions. Madhu went to the storeroom and got furious, finding Arjun with Rajjo and Manorama. Arjun tried to talk to her, but she angrily walked out. Seeing this, Manorama decided to leave with Rajjo the next day.

She expressed her gratitude to Arjun for saving Rajjo. Arjun assured Manorama to make everything fine. The next morning, Urvashi confronted Arjun about caring for Rajjo. Arjun assured her to send Rajjo back once she gets well. Urvashi said that she couldn’t be sure about it since Arjun was the one who brought Rajjo back into his life every time she had left.

Meanwhile, Rajjo decided to settle in Lucknow with Arjun and Pushkar’s help.

Pushkar arrived to take Rajjo and Manorama back to their village, but Rajjo shocked him by expressing her desire to work in Lucknow and to become independent. She sought his favor to find her and her mother a job in Lucknow. Manorama tried to stop Rajjo from asking help from Pushkar, but Rajjo was adamant.

Pushkar tried to break Rajjo’s determination by taunting that she was illiterate and she wouldn’t be able to tolerate the extreme heat in factories. Rajjo shut his mouth by mentioning her skin is as thick as Pushkar’s. Arjun agreed to help Rajjo and asked her to recover first.

Later, Manorama scolded Rajjo for disobeying. Rajjo complained about Manorama hiding the truth about her past from her. Rajjo was elated when Arjun got a job for Rajjo and her mom at his friend’s house. Just then, Manorama declined Arjun’s offer and called in Nanku and Vicky.

She declared Rajjo’s wedding with Vicky. Arjun was shocked to hear this. While Rajjo argued with Manorama and refused to marry Vicky, Arjun grew suspicious of Vicky. He doubted that Vicky is hiding something. Manorama firmly said that Rajjo had to marry Vicky, stating that was the only solution to everything.

Rajjo sensed that Manorama was hiding something from her and asked why she wanted to get her married hurriedly. Manorama refused to give her any justification. She asked Rajjo to fulfill all her dreams after marrying Vicky. Meanwhile, Urvashi told Arjun that Raajo wouldn’t come between them hereafter and she got her Arjun back.

Arjun assured Urvashi that Rajjo was only his responsibility and, as he had fulfilled it, now he could focus on his life with Urvashi. Chirag heard them talking. Later, Chirag advised Arjun not to ignore his feelings. Rajjo and Manorama got ready to leave Thakur’s house. Thakurs presented gits to Rajjo send her off. Rajjo looked at Arjun emotionally.

Madhu sent Rajjo and Manorama out of the house and closed the door to prevent Arjun and Rajjo having a talk. Arjun was sadly sitting in his room as Rajjo didn’t see him before her departure. He became happy when Rajjo got into his room through the balcony. Rajjo said that she couldn’t leave without meeting him.

She thanked Arjun for all his help and his care. Arjun asked about Rajjo being forced to marry Vicky when she wanted to live in Lucknow and work. Rajjo said that for the first time she had argued with her mom over this, but in the end her wishes got defeated in front of her mom’s wishes.

She said that she should consider Manorama agreeing to stay in this city as her half victory and should be happy. Rajjo became emotional when it was time to leave. Rajjo hugged Arjun tightly. Arjun hugged her back, controlling his tears. Later, Arjun was resting his head on Madhu’s lap and was sad thinking about Rajjo. He heard two guys talking about Vicky driving the car recklessly and rushed to find Rajjo.

Vicky drove the car recklessly and put everyone’s lives in danger. He tried to avoid a collision with a truck and stopped the car on the edge of a hill. Arjun reached there in time and rescued Rajjo and Manorama. He found a bottle in his pocket. Arjun scolded Vicky for driving the car in an intoxicated condition.

He wanted to call the police to get him arrested. Vicky clarified that it was just a herbal tea for throat infections which was very famous in their village. Arjun calmed down when Rajjo confirmed it. Arjun refused to abandon Rajjo now and asked Rajjo and Manorama to come along with him.

Manorama thanked Arjun for all his help to Rajjo and said that Arjun should stop being after their backs. She drew a line between Arjun and Rajjo and told Arjun how society discriminates between poor and rich. She said that Rajjo and Arjun could never be together. Rajjo tried to stop Manorama, but she shut up Rajjo.

Manorama advised Rajjo to settle in her life with Vicky.
In the upcoming week, it will be seen that Arjun will say to Urvashi that he forgot that he is hurting his dear ones by caring about others. He will assure Urvashi that hereafter he only thing about his dears one, about them.

On the other hand, Vicky will say to Rajjo that he heard her mom and her dad talking about Rajjo and Arjun staying in the same room. He says that Arjun would have asked something from her in return of his favor. Rajjo will get furious and will warn Vicky about speaking against Arjun.