The episode starts with Arjun’s family leaving Diya’s house. Madhuri tells Arjun that Diya didn’t take her gift. Later Diya promises Mohan that she will never meet Arjun again in future. Arjun calls Diya and tells her that they have to start their practice today only. Karan can announce the selection date anytime. He doesn’t let Diya speak. Karan’s spy follows Arjun and informs Karan that Arjun just bought something from the chemist. Karan says he needs every minute details of him. Arjun starts his car. Diya says she promised Mohan today she won’t meet Arjun but for practice she has to meet him. Diya takes permission from Meera before going for practice. Meera says Diya should not do this. Mohan will be angry. Diya tells her to support her till 21 days of practice. She says Ajit allowed her then why there will be any problem. Meera says Diya should not break her promise by meeting Arjun. Diya says he will be her trainer only nothing else.

Arjun waits for Diya and Diya gets into his car. Arjun says she is 40 seconds late. She has to learn time management. Diya apologises and Arjun asks her why she refused to take gift from his mother. Diya says she refused because people should not expect anything in return of helping somone. Else people will start hurting others to get gifts in future. Arjun starts his car and Karan two spies follow them. The spy informs Karan that Diya is also with Arjun. Karan tells him not to cut the call. Diya says it was always her dream to play badminton in Kolkata academy. Now it’s getting fulfilled. Karan’s spy fail to notice Arjun and Diya as they take a turn and disappear. They inform Karan and the latter says he is coming to meet them.

Arjun reaches badminton court with Diya and the latter says this place looks horrible and its dirty too. It’s closed for many years. Arjun says before playing Diya needs to love her playground first. He orders her to clean the court until he gets ready. Arjun goes to change. Diya starts cleaning the place.

Karan meets the spies. The spy stammers and Karan says he knows where they are. He goes to academy and says a banned player can’t train someone. He will catch them red handed and insult Arjun. There, Arjun comes out and sees Diya is sweeping the place. He tells her to do it fast. Diya gets tired after some time but Arjun keeps telling her to continue cleaning. Karan meets Radu and the latter gets shocked. Karan tells his spies to find Arjun in the old badminton court. But they don’t find him. Radu kaka acts like he has no idea what Karan is talking about. Karan gets mad at him and says stop your acting and you will resign from your job today for helping Arjun. He says he will destroy Arjun again very soon. Radu calls Arjun and informs Karan came here to find him. Arjun replies he knew that as Karan is doubting Radu so he arranged another court for himself. Arjun says he is having fun by troubling Karan.

Precap- Arjun tells Diya to burst some balloons by jumping. She does it and suddenly falls down. She gets hurt and Arjun shows concern to her. 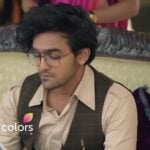