The episode starts with the court scene. Arjun requests the judge to allow him to question Sakshi. The judge approves it. Arjun questions Sakshi about Shantamoorthi. Arjun tells that she wanted Shantamoorthi’s land for her business, but he wasn’t ready to sell it. Arjun adds that Sakshi can go to any extent to get a land including murdering the land owner. Sakshi denies it. Arjun tells there large numbers of case on Sakshi and her dad went to abroad to escape from the police. Sakshi calls it a lie.

Arjun tells that sakshi and her dad are doing land mafia. They have threatened Shantamoorthi to kill and beated him, yet Shantamoorthi refused to give them the land. Sakshi used Priya aka Anu’s for her plan by giving her money. Anu shouts it’s not true, but the judge asks her to sit. Arjun continues that Priya had sent Babu to the police station to steal the yellow file which is related to the case. Arjun tells that he wants to question that Babu. The judge approves it.

Arjun asks Babu who asked him to get the yellow file from the Police station. Babu looks at Sakshi and the latter signs him to not reaveal her name. Arjun notices it. Arjun repeats his question. Babu confesses that Sakashi has sent him and he has done many illegal activities for Sakshi in the past. Arjun recalls how he and Chandrakadha beated and threatened Babu to confess the truth in the court. Arjun questions why Anu and Sakshi want that murder if they don’t have any connection with it. Manikam tells that Arjun is trapping his daughter. Arjun tells Manikam to not call Anu as his daughter. Arjun further tells that he has many more evidences to prove Anu is guilty. He asked to record Anu and Sakshi’s phone conversation and he can play it now.

He gives the audio to the judge. The judge plays it. Sakashi tells Anu that the guy that she sent to the police station to get the yellow file get caught by Chandrakadha and if he takes her name, police will come to her house and asks her to be alert. Arjun tells that if Anu tells that it’s not her voice, he can prove it it’s her voice. Arjun tells that Anu is the murderer. The judge objection it and reminds him that he’s not yet proved Anu is guilty. Arjun requests to question Roja. Manikam opposes it as Roja is Arjun’s wife and questions how they can believe her statement. Arjun reminds Manikam that he’s also the suspects Anu’s dad and how they can trust his arguments. All laugh. The judge silence them.

Roja is called. Arjun asks if she’s Roja. The latter asks if he doesn’t know her name
Arjun reminds that this is court and there’s no place for any relation. He asks her to tell what happened the day when police has come to the Ashram to investigate about Paiya murder case. Roja thinks. 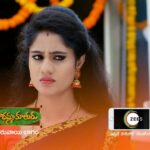 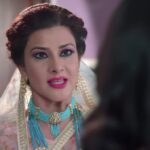