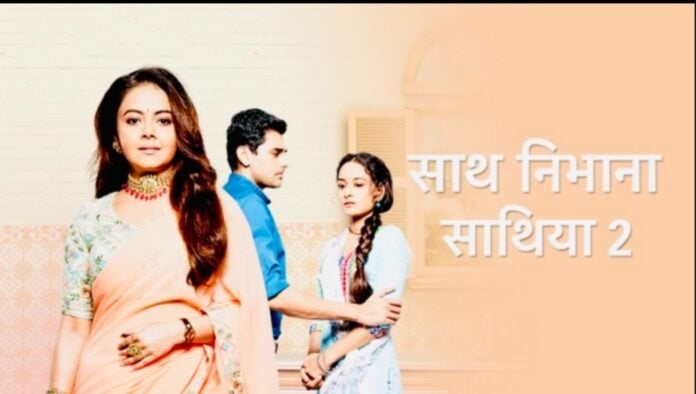 This week Saath Nibhaana Saathiya 2  begins with Pankaj cuts all ties with Swara. Swara tells Pankaj that if he thinks that she is wrong then she is ready to leave this house but she won’t forget their marriage and his love. She tells him that her intention was not wrong. Pankaj’s bakery staff comes there and informs Pankaj that they got 1lakh investment and also order of 3lakhs and with this their bakery will become Surat’s number 1 bakery. Pankaj asks him that how it happened. Pankaj’s staff informs him that Swara is behind everything. Swara smriks at Gehna. Pankaj asks Swara that what is all this. Kusum tells him that Swara did everything for him only. Pankaj gets emotional and regrets for yelling at Swara and apologizes to her. Later, Pankaj tells Anant that he feels that Gehna is jealous of Swara and warns him to stop Gehna from troubling Swara.

Other side, Swara tells Gehna that they can enjoy the life together and they never got chance to spend time together. Gehna agrees with her. Swara asks her to help to get close to Pankaj. Gehna takes her to Pankaj and tells him that Swara won’t enter his room until he accepts her as his wife wholeheartedly by forgetting Kanak which shocks Swara. Thens she takes Swara to guest room and tells her that this is her real place and leaves from there. Kusum gets surprised seeing Swara in guest room. Swara tells her that Gehna deceived her and now she won’t leave Gehna.

Next day, Swara asks Gehna that what is the latter’s problem with her. Gehna tells her that the latter choosed wrong path and she asks her to stop playing with Pankaj’s emotions because he won’t be able to handle her betrayal. After some time, Swara serves Desai’s. Jamuna struggles to breathe after eating peanut. Gehna gives allergic medicine to her. Swara accuses Gehna. But Jamuna defends Gehna and asks Swara to stay in her limits.

Later, society ladies invites Jamuna to the best daughter in law competition. They asks her to become one of the judge. Jamuna hesitates but Praful and Paresh convinces her. Those ladies asks Gehna, Hema and Swara to participate in the competition. Swara refuses to join hands with Hema. Then Hema visits Kanak in jail and informs her about best daughter in law competition. She also reveals about Pankaj and Swara’s marriage which shocks Kanak. She complains about Swara and Kusum. Kanak asks her that how can Pankaj marry someone else and tells her that she won’t leave anyone after release.

Next day, everyone reaches the competition venue. Host announces that they will get their winner after finishing 4 rounds and first round is race. Gehna wins the race. Swara loses it because she makes Hema fall down and then helps her to get up. Jamuna announces that Gehna won the race and praises Swara saying that how she helped Hema. Later, Hema visits Kanak in jail and tells her that what all happened. Kanak asks her to inform her mother to meet her. Jamuna tells Gehna that the latter’s behavior changing because of Swara. She says to her that if the latter was old Gehna then she would have helped Hema. She praises Swara in front of Desai’s and asks her to sit beside to have dinner which shocks Gehna and Anant.

After some time, Gehna prepares homemade remedy in the kitchen for Swara. Anant comes there and praises her for being such a kind person and leaves from there. In the guest room, Kusum tells Swara that she still remember the night when Gehna revealed the truth to her father and they had to leave the house that day. She says to her that she hates Gehna so much and she can’t stay calm until she snatches everything from Gehna. Gehna hears everything and drops the bowl in shock. Kusum and Swara notices her. Gehna breaks down and she does not let Kusum touch her. Kusum tells her that she remembered the past suddenly and said all this but she didn’t meant it and asks her to believe it. Gehna tells her that she was aware of it that Swara hates her and the latter supporting Swara in her wrongdoings but she never thought the latter also hates her this much. She gives the medicine to her and leaves the room.

Gehna tells everything to Anant and cries. He asks her to become strong because she has to fight against her loved ones. She tells him that she can’t forget that they are her family and she don’t want to lose them. He tells her that she won’t lose anyone. Next day, participants gets 2 thousand rupees for next round. Meanwhile, Kanak informs her mother about Pankaj’s marriage. She tells her to meet Sagar in jail and make deal with him.

Swara dances on her stall and Kusum collects money from audiences. Swara wins the second round and she tells Kusum that Jamuna glaring her. Pankaj congratulates Swara. Host announces that Desai’s leading in this competition for now. Anant asks Gehna that he is not able to understand that how Swara got this much money. Host asks everyone to be careful because theif stealing their money. Kusum recalls that how she stole money from audiences when they were watching Swara’s dance performance. She and Swara discuss about it. Anant and Gehna overhears that conversation. Gehna announces that Swara decided to donate the money she earned to the people who lost their money today. She informs them that Swara will cook for them to celebrate her success. While cooking, Swara is about to lose her control in front of Pankaj her but Kusum stops her.

Later, everyone sits for dinner. Tiya and Krishna enters the house. Kusum tells Tiya that if she was Jamuna then she won’t let her daughter roam with a guy like this. Swara tells her that she would not have given permission to Tiya as a elder daughter in law of this house. Tiya reveals that Gehna gave permission. Kusum tells Jamuna that everyone gossip about Desai’s in the stall because without marriage Tiya and Krishna living in the same house. Gehna tells her that Krishna is really a good guy. Jamuna asks her that why the latter didn’t asked her before giving permission to Tiya. She tells Tiya that from now the latter can’t go out like this. Gehna and others defends Krishna which upsets Jamuna. Krishna decides to leave Desai house but Gehna and Anant convinces him to stay.

In the upcoming episode, Jamuna will slap Gehna.