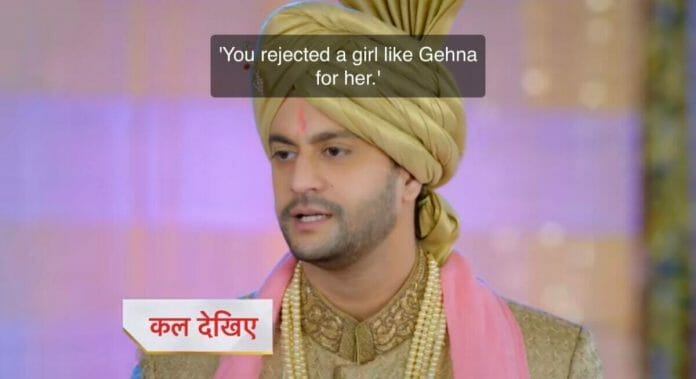 In the current track, Surya tells Gehna that he can’t ask her to leave Agastya because he can’t leave Suhani. He adds that he just wants her happiness. She tells him that he is her happiness. He asks her to stop this marriage. He fills her forehead with his blood and she hugs him. And it turns out to be his imagination.

Gehna asks Surya that what he want to say. He demands to accept that she is marrying Agastya wholeheartedly. She reminds him that he divorced her. She accepts that she love him still, she want to marry Agastya. She says that she won’t make efforts to stop this marriage and he has guts then he can do that.

Next day, Suhani gives money to few guys to do her work. Gehna sees that and tells her that the latter can’t do anything. Later, Gehna gets ready as bride. Surya asks her to return the nuptial chain to him. So she returns it to him. Riddhima tells Agastya’s parents that she loves Agastya.

Agastya’s guards catches Suhani’s guys. Marriage rituals begins and we can’t see the bride’s face because of veil. Suhani breaks the nuptial chain and she says that this marriage can’t happen. Agastya tells her that she can’t stop this marriage.

Surya tells Suhani that he thought his love will change her. Agastya reminds him that the latter left Gehna for Suhani. Surya says that this marriage can’t happen.

What is Suhani’s plan? Where is Gehna now?