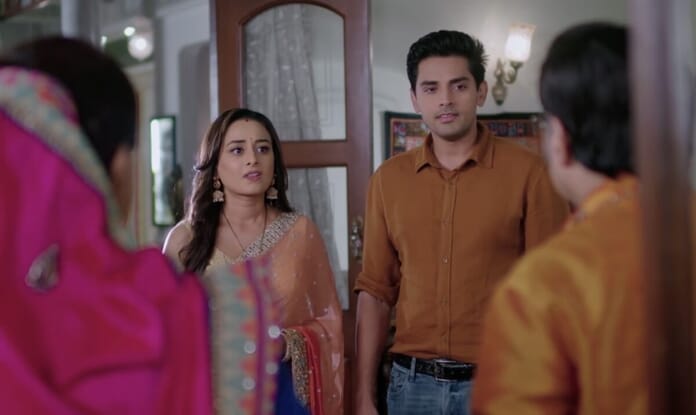 Star Plus’ popular show Saath Nibhana Saathiya 2 is gaining popularity ever since Gehna and Anant have started feeling for each other. Now, with thier anniversary nearing the corner, Gehna decides to surprise Anant by learning how to drive. Anant is yet to realise his love for Gehna but for viewers it’s easily visible. With lots of twists and turns coming, with Gehna being blamed for Hema’s accident. It will be interesting to watch how Gehna and Anant sustain Kanak’s evil plans against them.

In the current track, Gehna brings evidence about how Anant was taking online class during the accident and how the shopkeepers near that area have not seen any accident. Police praises Gehna’s skills but then they say Hema is still injured.
Gehna then reveals a CCTV footage where Hema is eating her favourite dishes on the hospital bed. Police releases Anant. The Desai family questions and scolds Hema. Hema is then locked in the store room by Jamuna. Jamuna also shows how she is disappointed on Gehna for hiding her driving class matter.

Anant and Gehna latter discuss how things need time to cool down. Gehna comes to Kanak to say how she knows Kanak was behind all this. Hema hears this and says from store room that it was her plan not Kanak’s. Gehna leaves. Hema says I saved you because you had saved me once in past.

Gehna is upset to not receive any wishes for her and Anant’s first marriage anniversary. Gehna gets surprised seeing Anant bringing her surprise gift. Anant asks Pankaj to bring cake. Kanak is irritated and makes Pankaj trip and cake falls.

Gehna appreciates everyone’s efforts. She is made to wear mangalsutra given by Anant. They celebrate. Kanak and Jamuna decide to go to some work. Jamuna screams. Everyone goes there and sees Kanak is not there and Jamuna telling them that Kanak is kidnapped.

Here, Kanak is telling the goons what to do and when. The goons call Desai mansion and threaten them. Hema tells Chetan that Kanak is doing drama. Anant and everyone decide that they are going to find Kanak themselves. Gehna and Anant find out about the car taken on rent.

The car owner calls the person who took the car on rent, Dinesh. Dinesh gets scared and informs Kanak. Kanak dresses up as tourist and Gehna and Anant are confused about Kanak really being kidnapped. Hema takes her decision and calls police to inform them. Kanal feels no one cares for her so she calls Jamuna to save her.

In the upcoming episodes, Everyone will be seen trying to find Kanak while a parcel comes to Desai mansion. Gehna will take it and open it. Gehna will recieve Kanak’s finger in a parcel. Here, Chetan will refuse to sell the Desai mansion. Anant will suggest that he has a plan.