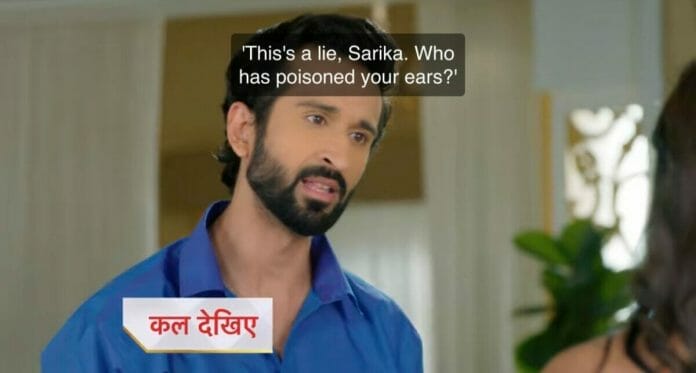 Sneha Jain and Gautam Vig starrer Saath Nibhaana Saathiya 2 is one of the top Star Plus show. It is a sequel to the long-running show Saath Nibhaana Saathiya. Now, Shreya joins Gehna’s side and Sarika lashes out at Suhani and Sikandar so it will be intriguing to watch that what going to happen in the future episodes.

In the current track, Riddhima acts like she cares about Surya. She tells Surya that Gehna don’t care about him at all. He says that Riddhima should not comment without knowing anything. Gehna brings tea for Surya saying that she knows to take care of Surya. She tells Riddhima that the latter is guest so she should not do any work.

Riddhima asks Surya to drop her in the market. Gehna tells her that she is going that way only so she can drop her. Riddhima goes to take her purse. Gehna tries to talk to Surya about Urmila but he does not let her talk and goes inside. Sarika asks her share from Suhani so she can live with Arjun peacefully after his release. Suhani slaps Sarika. Sakuni asks them to not fight.

Meanwhile, Gehna drops Riddhima in the market and she tells her to return to her house because no one can come in between her and Surya. Riddhima tells her that she won’t back off. Agastya says to Gehna’s photo that she should stay with him to know about his love and he hides the photo seeing Gehna. He asks her to his new law firm as partner. She asks him to find out that how Sikandar released from jail.

He informs her that Arjun took all the blame on himself on Suhani’s behest. Sikandar throws Shreya out of the house. But Surya and Gehna supports Shreya. Shreya goes to Gehna’s side to stay with them.

In the upcoming episode, Sarika will tell Suhani that Arjun going to die because of the latter. Sikandar will say that everything is lie. Sarika will blame him too. He will try to slap her but Gehna will stop him.

Will Arjun die? Will Sarika go against Suhani?