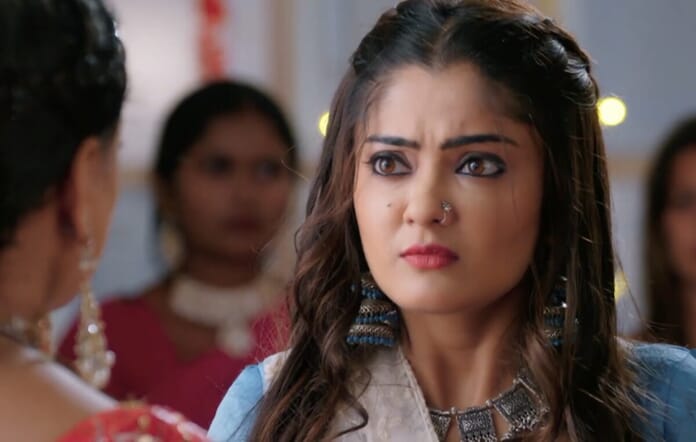 In the current track, a girl named Swara comes to save Jamuna. Gehna notices her. Kanak discovers that Swara’s mother is Gehna’s mother too and they got separated. Kanak thinks to use this to save herself from going to jail. Police arrives and takes Kanak while Kanak whisper to Gehna that she knows her secret. Gehna asks what? Kanak says if you want to know come and meet me in jail.
Kanak smirks. Gehna is in thoughts about what Kanak said. Anant asks Gehna not to give Kanak’s words so much importance as she is just playing with her mind. Gehna is still in thoughts and again has an encounter with Swara. Gehna takes care of Swara and her mother. Here, Jamuna thinks where is Gehna missing.

Gehna returns with Swara and her mother and she requests all to let them stay with us for one day. Jamuna is against it but hearing Gehna, Praful allows. After the puja, Gehna falls sick so Anant takes care of her. Here, Jamuna shows how upset she ia from Praful because she agreed to Gehna. Later, Gehna gets to know that Swara and she have same mother.

Gehna becomes emotional. Gehna hugs Kusum and then Swara. Swara is about to stab Gehna when Kusum stops her. Gehna goes to inform everyone. Here, Swara asks Kusum why she stopped her? Kusum says I remember what Gehna did with us but right now she has everything and we need to use the money and power she has and get her down. Flashback is shown where Kusum stole some jewels ans Gehna as a child exposes Kusum infront of her dad.

Kusum is about to slap Gehna but Kusum gets slapped by her husband and is asked to return the jewels but Kusum takes Swara and leaves. Flashback ends. Kusum blames Gehna for her misery and so does Swara. Gehna infroms the Desai about Kusum being her mother. Later, Swara and Kusum decide to defame Gehna and put her in a fight between them and her inlaws. Swara dances when the guests come. The guests find it odd and cheap. While Jamuna becomes furious, Gehna tries to defend Swara.

In the upcoming episodes, Gehna will be working in the Kitchen, when Anant will enter and watch her work. The couple will romance. Both will get mesmerised by each other’s presence.