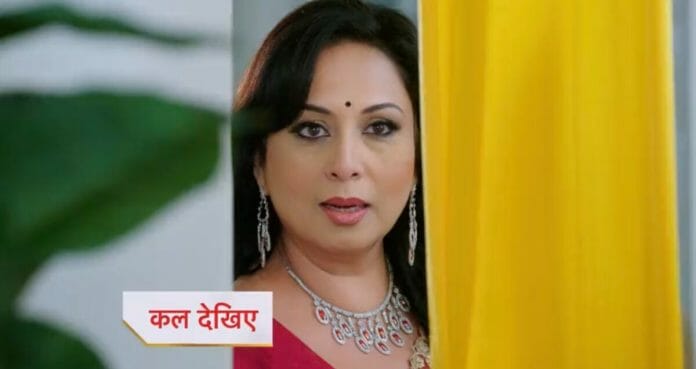 In the current track, Suhani takes food to office for Surya. She feeds him. She tells him that she feels like they will get separated if he back off from divorcing Gehna then. He tells her that he won’t leave her alone and she is above everyone for him. She says that Gehna will try everything to stop this divorce. He assures her that he won’t change his decision no matter what. At dinner, Dadi notices that Gehna knitting. She asks her that if the latter is pregnant. Gehna shook her head and says that she is knitting for her friend’s baby. Dadi asks Surya and Gehna that how they will handle Kaddu when she asks about their kids. She adds that Kaddu should not know about divorce. Suhani calls her sister Sakundala and asks her to visit Seth mansion saying that she needs her. She thinks that Sakundala can handle Kaddu. Next day, Gehna smiles recalling the moment she shared with Surya. He requests her to not take the case to court and divorce mutually. She tells him that he wants divorce but she will tell in the court that she don’t want divorce. He tells her that the latter is his life and for Suhani he can die. Agastya calls Gehna and informs her about court hearing date. He asks her to bring proofs against Suhani.

In the upcoming episode, Someone will scare Suhani.

Who is scaring Suhani? Will Sakundala be able to handle Kaddu?