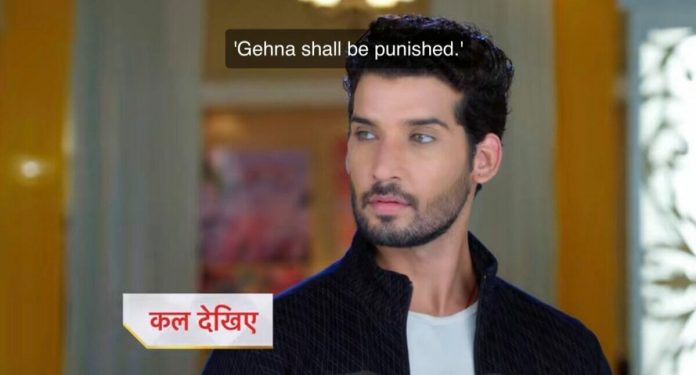 In the current track, Jeweller opens the locker and Seth family gets shocked seeing their jewels there. Surya asks Gehna that what is all this. Suhani asks Kaddu bua that if the latter still thinks that Gehna is innocent. Kaddu bua says that let’s talk about it in their house. They reaches Seth mansion.

Sikandar asks them to throw Gehna out of the house. He tries to drag Gehna so Surya stops the former. Sikandar and Surya fights. Suhani pleads Kaddu bua to take a decision. Kaddu bua says that Gehna should leave the house if she can’t prove her innocence till tomorrow then.

Sikandar tells her that he can see that she is trying to save Gehna. She tells him that if court can give a chance to him then why can’t she give a chance to Gehna. Later, Surya tells Gehna that he will prove her innocence. Urmila gives Gehna’s earring to her and says that this earring beats were found in Suhani’s purse. Surya decides to talk to Suhani about this.

Gehna stops him and says that they can’t alert Suhani by confronting her. Urmila tells Surya that she will help him to prove Gehna’s innocence. He tells her that he is enough to prove Gehna’s innocence and goes inside. Gehna finds duplicate key of locker in Sikandar’s room but she could not get it. Surya and Dada leaves to meet jeweller. Surya gets an idea to make jeweller confess the truth.

In the upcoming episode, Gehna to get afraid that she did not find anything to prove her innocence. Then she will find Sikandar’s car key and try to open the car. Sikandar will come out of the house.

Will Sikandar see Gehna? What is Surya’s plan?