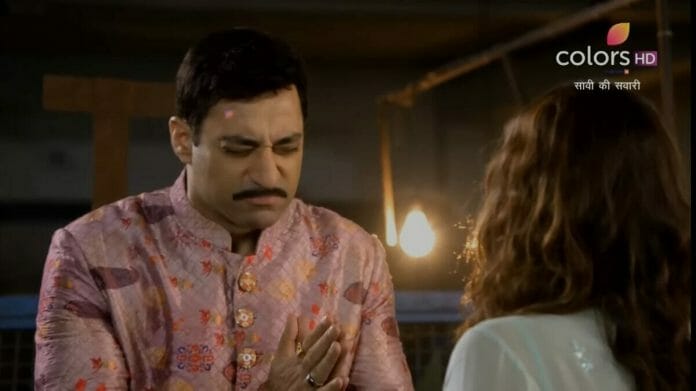 Colors TV show Saavi Ki Savaari features Samridhi Shukla as Saavi and Farman Haider as Nityam in the lead roles. This is the story of the girl who drives auto to lead her family. Now, Himesh stops Thasvi and Tushar’s marriage so it will be interesting to watch that what going to happen in the future episodes.

Earlier its seen that, Saavi stopped the bus. She scolded Thasvi for taking this decision. Thasvi told her that she felt loneliness in that house. Tushar told Saavi that Dalmias won’t accept him. She asked him that how can he say that without talking to Dalmias. He told her that he want to marry Thasvi today.

Thasvi agreed with him. Saavi agreed to make arrangements for their marriage. Other side, Himesh asked Dimpy that why Saavi will help Thasvi to elope with factory worker. Dimpy told him to check for Thasvi’s sake. Krishna told Shivam that he faced so much due to Sonam so he want justice.

Shivam promised to take revenge on Sonam. Ratna wondered that why Shivam stopped Krishna. She sent Sonam to give interview. Saavi took Thasvi and Tushar to the temple and she tried to call Nityam. Dimpy brought Himesh there.

Gullu met Nityam and told him that Saavi took credit from his brother. Himesh called Nityam and scolded him for trying to ruin Thasvi’s life. He talked about Saavi’s involvement in Thasvi’s marriage.

In the upcoming episode, Himesh will yell at Saavi for arranging Thasvi and Tushar’s marriage. Other side, Nityam will tell Gullu to throw Saavi’s auto in junkyard if he want money then.

What will Saavi tell to Himesh? Will Saavi lose her auto permanently?