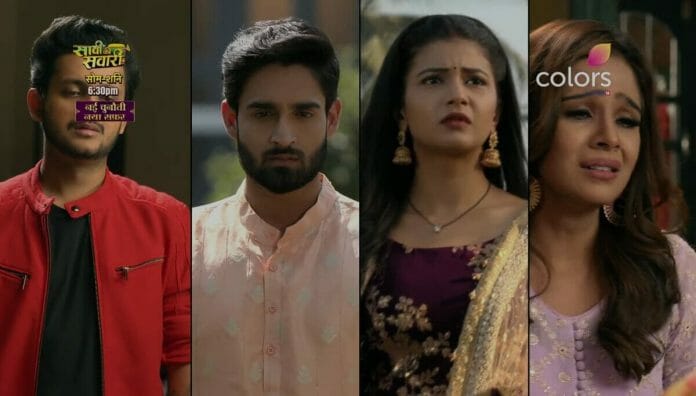 Colors show Saavi Ki Savaari features Samridhi Shukla as Saavi and Farman Haider as Nityam in the lead roles. This is the story of the girl who drives auto to lead her family. Now, Shivam reaches Dalmia house so it will be interesting to watch that what going to happen in the future episodes.

Earlier its seen that, Saavi entered the room and got shocked seeing Nityam in towel. Nityam argued with her. He said that he is getting late to go for office. She told him that he broke the rule because it’s his jogging time and she entered the bathroom. Dimpy apologized to Priest and gave spiked juice to him to stop him from come for tonight puja.

Saavi stopped Nityam from going to office with Uma devi’s help. Shivam told Sonam that he want to see her suffering. He called Saavi and told her that he want to meet her. Saavi send her location to Shivam. She got excited to introduce Shivam to Dalmias. She assumed that Shivam want to talk about his marriage with Sonam.

Shivam told Sonam that he is going to tell the truth to Saavi’s husband and left from there. Sonam also escaped from there to stop Shivam. Priest narrated bharat milap story. Nityam recalled the moments he shared with Raksham and went to gate.

In the upcoming episode, Nityam will tell Vedika that she did wrong by forcing him to marry Saavi. He will say that he hate Raksham. Shivam will overhear their conversation.

What Vedika will say to Nityam? Will Nityam and Vedika see Shivam?