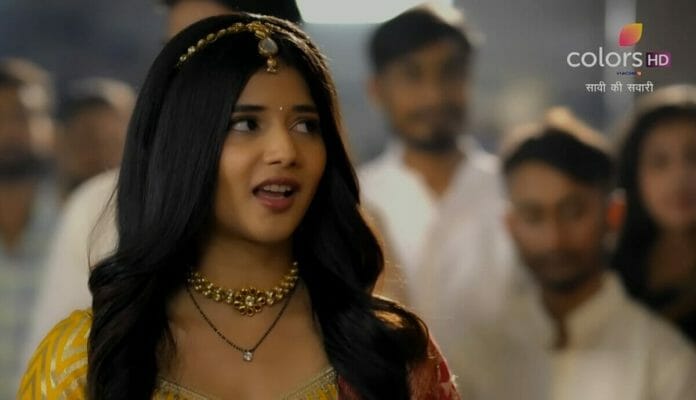 Colors TV show Saavi Ki Savaari features Samridhi Shukla as Saavi and Farman Haider as Nityam in the lead roles. This is the story of the girl who drives auto to lead her family. Now, Saavi makes arrangements for Thasvi and Thushar’s marriage so it will be interesting to watch that what going to happen in the future episodes.

Earlier its seen that, factory worker’s daughter thanked Nityam for giving job to her father. Vedika and Joshi told Nityam that he is reason for factory workers happiness and they love him. Saavi competed against Nityam in kite flying game and she lost it. Nityam got excited for winning.

Dimpy planned to keep Thasvi’s letter in Saavi’s purse. Vedika reminded Sonam about job interview. Sonam left from the factory with Ratna. They learnt that Krishna regained his consciousness and left the hospital. Police released Shivam. Shivam got happy seeing Krishna and he asked him to not give statement against Sonam.

Ratna and Sonam saw everything. Saavi refused to accept Manager position saying that she don’t deserve it. She convinced Joshi to accept it because he has experience and skills. Saavi got Thasvi’s letter due to Dimpy and she reached the bus stand to stop Thasvi.

In the upcoming episode, Saavi will ask Thasvi and Thushar what she can do for them. Thasvi will tell her that she want to marry Thushar today. Saavi will arrange their marriage. Himesh will learn about it and he will scold Nityam for using Saavi as pawn to hurt him.

Will Saavi let this marriage happen? What Nityam will do now?