The episode starts with Ishaani saying NV that no matter what happens she’ll definitely get all her answers from Sid the next day while NV stands worried. Later NV is looking at his wedding picture with Ishaani when Bebe comes there with food for him. He immediately hides it while Bebe asks why’s he spoiling his own life by bringing Sid and Ishaani together. She says that she should have brought him up with bit understanding from childhood. She feeds him with her hands as ge was hungry the whole day.

NV says that he has promised Ishaani to always be by her side and keep her away from all the pains of her life. He says that the promise can’t be fulfilled unless and until Ishaani gets her answers. Bebe asks what about him and why’s he not confessing his love for Ishaani. NV says that Ishaani doesn’t want to be with him as she doesn’t value the marriage.

Bebe asks if Ishaani doesn’t value the marriage then why would she care for everyone and love her so much. She says that Ishaani does value the marriage. NV recalls the time when Bebe was admitted in the hospital but none of the doctors were available for service. He says that only Dr. Shashank came at that time to save her and Sid is Dr. Shashank’s son. In this way he wants to cure both Sid as well as Ishaani but Bebe is still not convinced. They look up to find Ishaani standing there who says that no matter what happens she’ll definitely get her answers the next day and leaves. NV calls her adamant.

Rahil and Rishab are discussing about Sid’s condition and hopes that Ishaani doesn’t ask him anything as it can put his life in danger. Ishaani comes to hospital and goes inside the ward only to get shocked to find it all decorated with balloons and pictures of Sanjivani people three years back.

NV, Bebe, Rahil and Rishab and everyone were also present while Sid looks st her smiling. He opens his arms for her to hug him while Ishaani stands still. A hesitant NV brings her to him and places her hand on him. Bebe looks at it disgusted while Ishaani immediately drew back her hand. Sid takes out a flower crown and NV helps him in placing ft on Ishaani s head.

NV says Sid that he had made arrangements as per his wish and says Ishaani that Sid wanted to surprise her. Sid thanks NV for his help while Ishaani immediately removes the crown. She says that she wants to say something while Sid asks her to proceed. She says she wants her answers while NV looks shocked.

Precap : Ishaani taunts Singh for the planning but says that he could never achieve what he wanted. 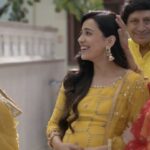 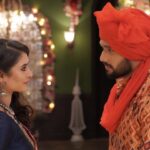