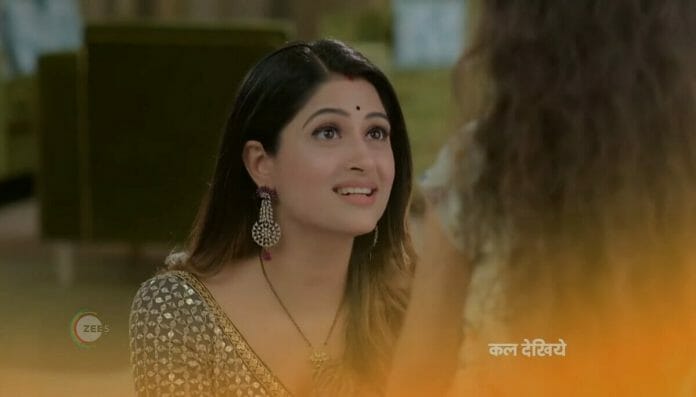 Episode starts with Amrita going inside Tara’s room while the latter denies to talk to her. She ask her mother to leave and shows her anger stating that she doesn’t came to pick her up from the tution. Meanwhile, Amrita tells Tara that she have a surprise for her and states that her favorite celebrity has come to meet her. Tara gets excited and ask if Rabir Kapoor is there in their house? To which Amrita nods positively and says that it’s her gift. Tara shows her gratitude towards Amrita and then rushes downstairs to meet her favorite actor. Amrita ask her to have patience, while the lights turns off and a guy starts dancing on Rabir Kapoor’s songs.

Here, Tara tries to see the guy’s face and enjoys the performance. She looks at Amrita being elated while the latter smiles at her daughter’s happiness. Meanwhile, the song ends and the lights come back. Tara gets shocked seeing a guy wearing Ranbir’s face mask. She becomes furious as he reveals the mask and exposes himself to be Alok.

Tara shouts at Amrita for lying to her and shows her anger. Everyone gathers there hearing her scream. Amrita tries to calm Tara while the latter rebukes her mother for lying. Meanwhile, Rajeev confronts Amrita and ask that what she did again? To which the latter states that she will tell the truth to everyone.

Elsewhere, Rajeshwari and Ranjini also rebukes Amrita and proclaims that why she keep troubling Tara? Meanwhile, Amrita looks at Tara and brings her closer. She reminds Tara about the times when the latter lied to Amrita and says that she also felt the same kind of disappointment. She tells that she planned all this just to teach a lesson to Tara, so that she won’t lie again.

Tara understands Amrita’s concern and apologises to her while the latter also asks sorry for not picking her from tution and lying about Rabir Kapoor. They both ends their differences and gets together. Rajeev smiles seeing his daughter happy and joins his family. They all enjoys their family moment while Gauri becomes furious seeing the reunion of Tara and Amrita.

Ahead, Amrita sees a nightmare in which Tara and Chanda were playing and the lights goes off. Tara gets scared while Chanda assures her stating that she is with her. Meanwhile, Gauri comes there and stabs Tara with knife. Amrita wakes up being afraid and shares her worry with Rajeev while he ask her to go back to sleep. She gets tensed for Tara and goes to check on her.

Amrita sees Tara and becomes calm after seeing her sleeping. She goes out of the room and then again enters there in the morning to wake Tara but becomes shocked upon not finding her. She notify Kotharis about it while everyone gets worried. She enters inside Gauri’s room and ask if Tara is with Chanda, to which they denies and says that they are packing their stuffs to leave from there.

Further, Rajeev gets a ransom call and ask not to inform police if he wants to save Tara. Alok tries to help them but Rajeev denies and goes to save his daughter. They becomes emotional seeing Tara’s condition in the video sended by kidnapper, while Amrita prays for her daughter. The God shows her a sign while she confronts Gauri secretly and doubts her for hiding Tara. The latter denies her allegations while Rakshita comes there and supports Gauri. She tells Amrita that the latter was sleeping and wasn’t behind Tara’s kidnapping, while Amrita gets tensed. Meanwhile, Alok assures his sister in order to save Tara.