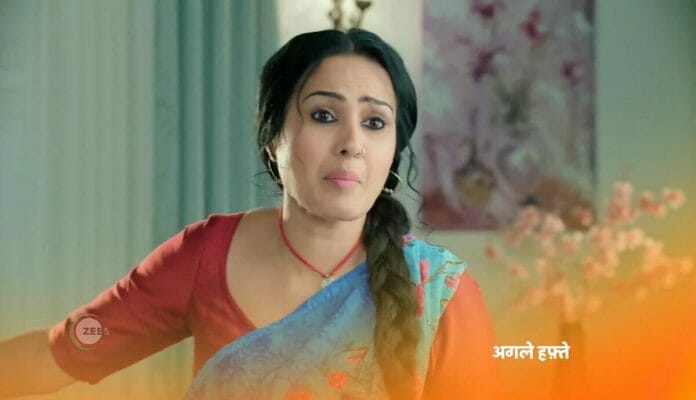 Episode starts with Gauri mistakenly revealing about the swapping of Tara and Chanda to Gopal. She proclaims that Chanda is not their real daughter while he gets shocked. Gauri realises her mistake and turns towards Gopal. She holds him and and tries to calm him down. He denies to believe it, while she tells him that he have to accept the truth. She reveals how Amrita and she had given birth at the same hospital and at the same time. She also reminds that their babies got exchanged when Gopal went inside the hospital to bring out their daughter.

Here, Gopal gets flashes of the time when he went inside the hospital and took his daughter away from there in order to save his family from the police. Whereas, Gauri also notify that how she find about the truth from the documents which Amrita tried to hide from everyone. Gauri tells Gopal that Chanda is not their own daughter and it’s Tara.

Gopal becomes shattered and gets teary eyes. He says that he loves and only thinks about Chanda as his daughter. Gauri ask him to accept the truth and states that Tara will help them to get rich. She proclaims that till the time Tara is close to Rajeev, they will get benifit from her. She proclaims that they won’t have to live like servants and will enjoy their life lavishly.

Elsewhere, Gauri meets Amrita inside the kitchen and behaves nicely with her. She smiles and talks politely while Amrita gets suspicious seeing her changed attitude. She glares at Gauri and ask about the matter, to which she proclaims that she is following Amrita’s advice to become polite. Amrita tells that she can feel Gauri is upset with Ranjini’s words, to which the latter replies that she is trying to move on from it.

Gauri appreciates Amrita and fakes her praise towards the latter. She then goes inside Tara’s room amd starts manipulating her. She makes her wear the crown and tells that she is princess and doesn’t have to any of her work. She instigates the kid while the latter gets happy and decides to follow her advice.

Ahead, Amrita gets inside Tara’s room and gets shocked seeing Gauri and Tara together. She confronts Gauri and ask the reason for her being in that room, to which Gauri makes some excuses. The latter indirectly talks about Tara being her daughter, while Ranjini hears their conversation and gets suspicious. She determines to find about the truth.

Ranjini tells about the matter to Rajeshwari while the latter confronts Amrita. She questions that why Gauri was asking about the daughter, to which Amrita tries to make some excuses. At that time Gauri comes there and handles the situation by lying to them. She smirks looking at Amrita after saving her while the latter gets confuse by Gauri’s behavior.

Later, Tara bribes Chanda to do her homework while Amrita gets suspicious when she sees Tara’s work and ask her to tell the truth. Chanda tells the truth being afraid while Amrita scolds Tara and the latter gets furious at Chanda. Meanwhile, Amrita shares her worry with Alok while he advice her not to take anything seriously as kids makes some mistakes. Whereas, Gauri ask Gopal to keep his eyes on Tara as she will make them rich but the latter keeps looking at Chanda being emotional.