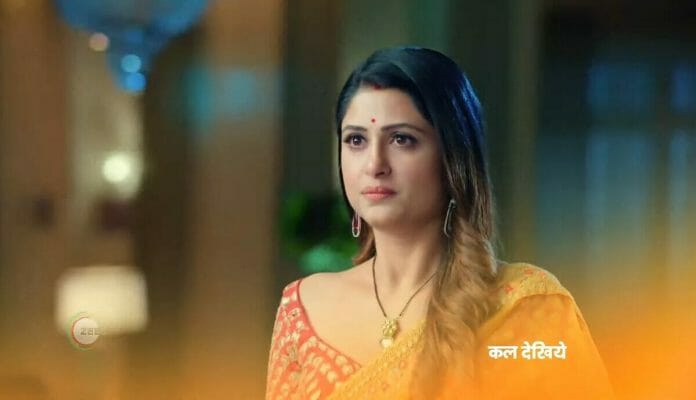 Episode starts with Rajeev having a conversation with Rakshita. He apologises for his mistake and insists her to forgive him. She shows her anger regarding his rude behavior, while he recalls his words and accepts that he did wrong to her. She was about to leave from there, but he stops her and ask her to give one more chance to him. She says that she loves him but she wants to be his wife and without that relationship, they can’t stay together. He assures her that soon he will get rid of Amrita and will fulfill all the demands of Rakshita. He proclaims that soon he will welcome her in his life officially.

Here, Rakshita smiles hearing Rajeev’s promise while the latter hugs her tightly. At that moment Amrita comes there and stands near the door. Rajeev and Rakshita gets shocked seeing her while she comes inside the room. She confronts them about the matter while Rakshita handles the situation by saying that she came to Rajeev for help, as her phone wasn’t working and Rajeev is good with repairing the gadgets.

Rakshita goes away from there while Amrita stops Rajeev and shares her worry with him regarding Tara. She states that their daughter is behaving weirdly since Chanda came to their life. She states that they have to do something, while he misbehaves with her. He blames her for the situation while she request him to forgot their misunderstanding.

Elsewhere, Rajeev warns Amrita that soon she will find out about the action he have taken for their misunderstanding. He leaves from there after taunting Amrita, while the latter gets confused with his behavior. Meanwhile, Heera and Panna mocks Chanda as she comes to meet them. They says that she is trying to show off her luxuries while she denies their allegations and says that they are still her family.

Chanda decides to remove the gold chain from her neck which was given by Rajeshwari. She says that if they have problem with the chain then she won’t wear it. She was about to remove it when Gauri comes there and stops her. She rebukes Chanda and warns her to keep it always with herself, stating that they have the luxuries till Chanda wears the chain.

Ahead, Gauri scolds Heera and Panna also and sends them away from the room. Chanda cries and states that she just wanted to meet her family as Amrita told her that she can visit them whenever she wants. Gopal consoles her and makes her laugh. He cheers her mood and gets hurt by Gauri’s behavior towards Chanda.

Rajeev and Amrita arranges a special way to make Tara understand that their love for her will never change. They makes her recall their happy moments and proclaims that nothing will change of Chanda comes into their life. Whereas, Tara makes a fake promise to her parents and smirks thinking about her ploy against Chanda. Meanwhile, Rajeshwari ask about the party preparation from Amrita while the latter assures her. At that time Tara makes a ploy against Chanda and ask her to come to the stairs in order to make her fall with the wire.

Further, Gauri gets shocked seeing Tara’s plan but Chanda gets saved as Ranjini moves upstairs before her and gets injured. Gauri hides the wire to save Tara and becomes impressed with her plan. She encourages her while the latter determines to throw Chanda out of her house.

Meanwhile, Rajeshwari announces about adopting Chanda in front of all the guests, in order to give the latter a platform to showcase her talent. Amrita confronts Rajeshwari for not telling the truth and states that Chanda won’t be able to accept them, but the latter scolds her and says that they can’t reveal the truth. Meanwhile, Chanda comes there in joker costume and misbehaves with Amrita when the latter tries to question her, while Tara smirks looking at the scenario.

Episode starts with Gauri instigating Tara against Amrita while the latter gets afraid and acts innocent in front of her mother. She apologises to Amrita in order to win her trust and then smirk towards Gauri indicating her about their plan. Whereas, Gauri smiles evilly thinking about her motive, but Amrita gets suspicious about her. She confronts Gauri and ask about her ploy. She mocks the latter in order to make her spill the truth, but Gauri smirks and says that she doesn’t get affected by Amrita’s words. She declares that she won’t reveal anything to the latter and indirectly gives a warning to Amrita.

Here, Amrita becomes worried but determines to protect her family as well as daughters. Meanwhile, Gauri goes towards Rakshita and confronts the latter. She says that she have heard Rajeev and her conversation. She taunts Rakshita about her dull face and advice to look after herself in order to get back to Rajeev. Rakshita gets frustrated with Gauri and was about to leave but the latter stops her.

Gauri threatens to leak Rakshita and Rajeev’s video and says that the whole world will throw shame on her. Rakshita gets scared and ask her not to do it, while Gauri ask her to follow her instructions. She also warns her not to show attitude in front of her and makes her behave nicely towards her. Meanwhile, Amrita sees them together and gets doubtful about their conversation.