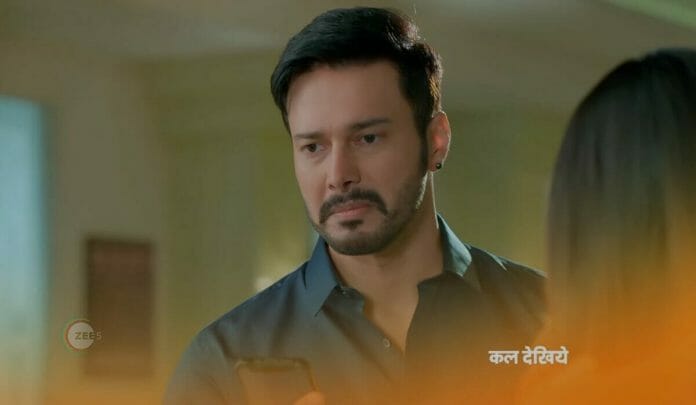 Zee Tv’s popular daily soap “Sanjog” is unravelling lot many dramas with each passing day. The show is making the viewers curious, with its unpredictable storyline. Previously, Gauri ployed to create rift in between Tara and Amrita. Her plan worked and Amrita got rebuked by Kotharis as well as Tara denied to talk to her. Amrita tried to pacify her daughter while Chanda notified her about the truth.

In the current track, Amrita learns about Gauri’s plan to create problems in between her and Tara. She plans a move to make her daughter realise her fault. Tara accepts her mistake and apologises to Amrita, while the latter also ask for forgiveness from Tara for not being able to pick her from the tution.

Here, Amrita gets restless after seeing a nightmare. She becomes scared as she sees someone kidnapping Tara and the latter shouting for help. Amrita wakes up from her dream being frightened, while Rajeev ask her about the matter.

Amrita tells him about her nightmare whole he gets irked by her and ask not to disturb his sleep. She becomes restless and goes to check on Tara. She becomes calm after seeing her daughter sleeping peacefully and then goes back to her room.

Ahead, Amrita wakes up in the morning and goes inside Tara’s room to see her but gets shocked upon not finding the latter. She gets inside Gauri’s room to ask about Tara but gets disappointed as the latter wasn’t there.

Gopal and Gauri packs their stuffs to leave Kotharis house whole Amrita tells about the matter to her family. Everyone gets worried while Alok also comes there to find Tara. Meanwhile, Amrita prays for her daughter and confronts Gauri about it.

Later, Rajeev gets a ransom call and goes to bring his daughter back. Whereas, he denies to take police help. Whereas, Rakshita tells Amrita that Gauri is not involved behind Tara’s kidnapping and gives her surity for it.

Now in the upcoming episode, Amrita will say that she will do anything to bring Tara back. She will ask Alok to involve commissioner in the matter, while he will agree to her. Alok will proclaim that they have fulfilled all the wishes of the kidnapper but still they haven’t released Tara. He will state that now they will involve the police to get Tara back.

Will Amrita be able to find the culprit?

Will Alok be able to help Amrita?