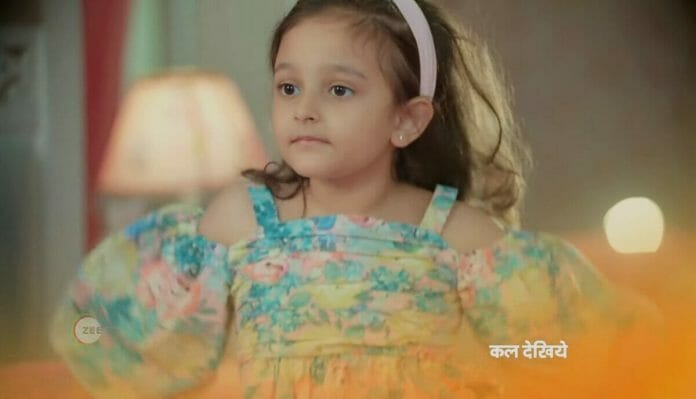 Zee Tv’s popular daily soap “Sanjog” is unravelling lot many dramas with each passing day. The show is making the viewers curious, with its unpredictable storyline. Previously, Gopal surrendered to save his family and got imprisoned for seven years.

Whereas, Amrita got shocked by Rajeshwari’s behavior towards Tara. She stands against her mother-in-law, while the latter created a drama to leave the house. Rajeev scolded Amrita and made her apologize to Rajeshwari.

In the current track, Rajeev warns Amrita not to hurt Rajeshwari again, while the latter gets a plan and asked the priest to read Tara’s horoscope. Rajeshwari gets elated hearing that the baby will bring good health to her and decides to keeps it along with herself.

Here, Amrita gets emotional seeing her daughter getting Rajeshwari’s love. Whereas, after seven years Tara becomes rebellious. Amrita gets concerned for her daughter’s behavior and prays for her well-being. Manju compares Amrita with Tara and says that her daughter doesn’t have a single trait of her.

Gauri gets furious at Chanda for not killing the hen. The latter scolds her and proclaims that she doesn’t look like she belongs to their family. Chanda shows her soft side and says that she can’t kill anyone.

Ahead, Amrita works on the project when she gets a call from Tara’s school and rushes towards there. She gets shocked finding about Tara’s complaint that the latter beats her classmates. Amrita denies all the allegations but teachers shows her proofs.

Amrita gets concerned for her daughter and decides to take her away from the school. Rajeev rebukes Amrita for her decision and Rajeshwari shows her support towards her son. They pampers Tara and spoils her while Amrita objects about it.

Later, Amrita takes a decision to teach Tara on her own, while everyone gets shocked. Amrita tries to explain Rajeev about the problem of their daughter, but he denies to listen to her and accuses her to be wrong.

Now in the upcoming episode, a police constable will call Alok and gives him a good news. He will tell that finally they found Amrita’s real daughter, while Alok ask for the birthmark picture.

The constable will ask Chanda about her name, when she will hug Gopal. He will take permission from Gopal to click her picture and sends it to Alok. The latter will confirm about Chanda being the real daughter of Amrita and ask the constable to keep an eye on her.

He will rush to bring Chanda back, while at that time Amrita will come there and gets shocked seeing the photographs.

Will Amrita find about the truth?

Will Gopal gets released from the jail?