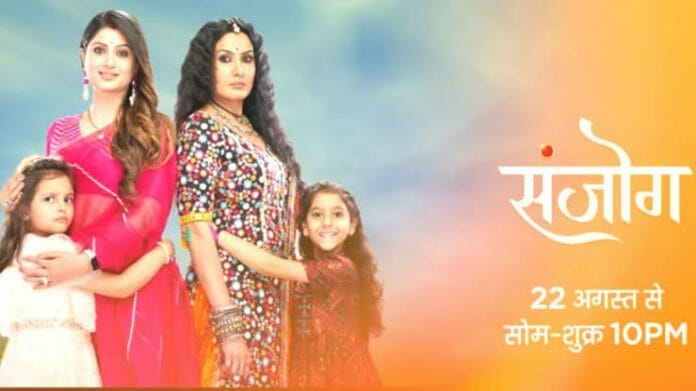 Zee Tv’s popular daily soap Sanjog is grabbing the attention of the audiences. Viewers are loving the track, whereas the twists in the story is keeping them hooked to their television screens.

This week the storyline showcases Rajeshwari ploying against Amrita. She denies to accept Tara as the heir of her family and shows her disappointment for having a girl child. Ranjini also manipulates her mind against Amrita and says that the latter is celebrating without her. Rajeshwari expresses her anger, while Ranjini taunts Amrita for not involving Rajeshwari or asking about her health.

Here, Amrita visits Rajeshwari and tries to convince her to bless Tara. The latter denies and shows her disappointment, while Amrita gets shocked finding about her mother-in-law’s mindset. She takes a stand for Tara and proclaims that her daughter deserves all the happiness. She also tells that she can’t stop any function as the day is auspicious for Tara.

Rajeev also comes there hearing the argument while Amrita tells him about Rajeshwari’s mindset. She says that the latter denies to accept their child, while he rebukes Amrita only and ask her to show some concern towards Rajeshwari as she is not well. Ranjini provokes him against Amrita and he scolds her.

Elsewhere, Amrita performs the naming ceremony of her daughter without the presence of Rajeshwari, while the latter gets furious and decides to leave the house. Rajeev warns Amrita and lashes out at her. She apologises to Rajeshwari and assures not to disobey her anymore. The latter agrees to stay with one condition.

Amrita gets worried about convincing Rajeshwari to accept Tara and then decides a plan. She makes the priest say that Tara’s horoscope shows that she will be beneficial for her grandmother. Rajeshwari hears it and becomes selfish. She accepts Tara while Amrita becomes emotional as her plan worked.

Ahead, Gopal sacrificed himself for his family and got 7 years of imprisonment. Gauri becomes heart broken while he insists her to look after their daughter Chanda. Meanwhile, she blames the latter for Gopal’s condition and ignores the child. Gopal’s mother tries to make her understand but Gauri remains unaffected.

Amrita and Madhu gets concerned seeing the grown up Tara as she becomes rebellious. Madhu says that her daughter isn’t like her, while Rajeshwari bribes the kid to send her to the school.

Amrita speaks against Rajeshwari’s upbringing but the latter rebukes her. Meanwhile, Tara fights with her schoolmates and Amrita gets called by the teachers.

Further, Amrita gets shocked finding about Tara’s deeds and decides to take her out of the school. She determines to give home tutoring to the latter, while Rajeev and Rajeshwari creates drama over her decision.

Rajeshwari challenges Amrita and proclaims to send Tara tk boarding if Amrita fails, while the latter hears about it and starts showing her anger towards Amrita.

Amrita consoles Tara and assures that she won’t let her go anywhere. Meanwhile, Alok keeps searching for Amrita’s real daughter. Whereas, Gauri gets furious at Chanda for being soft-hearted.

They goes to meet Gopal while a constable sees the birthmark of Chanda and sends it to Alok. The latter matches it with Amrita’s real daughter and gets confirmed. He instructs the constable to keep an eye on them.

Later, Gauri intoxicates the police officers by spiked food and helps Gopal to escape. He gets elated meeting his family, especially Chanda. They then decides to leave their house and starts packing all the stuffs.

Pradhan tries to stop them but Gopal fights against him. Meanwhile, Amrita reaches Alok’s house and gets shocked finding about her daughter. Whereas, Tara keeps asking for her mother and gets critical.

Rajeshwari informs Rajeev and he brings the doctor. The latter keels asking for her mother while the doctor warns Kotharis to look after Tara’s state. Rajeev tries to call Amrita but she doesn’t receives his call, as she was busy in finding about Chanda along with Alok.

She checks the house but found no one and becomes devastated. Chanda retuns back to her house and Amrita was about to see her when Gopal takes his daughter away.

Gopal saves Chanda’s life as she was about to fall down. Whereas, Amrita returns back to her house and worried about Tara’s state. Ranjini blames Tara for it, while the latter tris to explain herself to Rajeev. She decides not to reveal the truth in front of Tara and ask Rajeev to trust her. She proclaims that she will tell him the truth afterwards while Tara hugs her mother and expresses her love.

Now in the upcoming episode, Gauri will warn Gopal that police won’t leave him. She will scold him for only caring about Chanda, while he drives the truck running away from the police.

Alok will follow him and determines to save Chanda, while Amrita will look after Tara and prays to get her real daughter back. Meanwhile, Gauri will tell Gopal that he can’t afford to go back to the jail. Alok will get shocked seeing Gopal going towards the cliff, while Gauri and the family will also gets dumbstruck.

Lot more drama and twists to come in Sanjog, don’t miss watching the show. Stay tuned with us for more Spoilers, informations and written updates of your favourite shows.