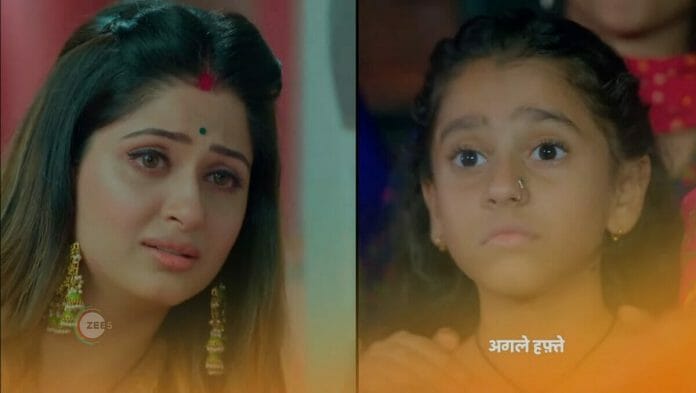 Zee Tv’s popular daily soap “Sanjog” is unravelling lot many dramas with each passing day. The show is making the viewers curious, with its unpredictable storyline. Previously, Alok and Amrita searched for Gauri but couldn’t able to find her.

Whereas, Gopal hided along with his family from the police and then decided a ploy to trick them. Gauri got concerned for Gopal, while Amrita notified the truth to Rajeev but he denied to believe her.

In the current track, Rajeev gets instigated by Rajeshwari and Ranjini. He also lashes out at Amrita for lying about their daughter Tara. He denies to believe the truth that his real daughter Chanda gets swapped by Tara. He also rebukes Amrita and proclaims that he would have given her divorce but is bearing her only for Tara.

Here, Amrita gets shocked by Rajeev’s behavior, while Gopal planned an act to trick the police. He jumped off the truck before throwing it down the cliff and blasting it. Alok gets shattered thinking that Chanda died in the accident.

Gopal and his family changed their look and decides to mingle with some rich families, where police can’t catch them. Gauri insists to get inside Amrita’s family, whereas Gopal showers his love towards Chanda and states that he can do anything for her.

Ahead, Alok notify Amrita about the accident of Chanda but she denies to believe that her daughter is dead. Meanwhile, Tara consoles her mother and ask her to be with her.

Later, Ranjini tries to get close to Rajeev and creates differences in between Rajeev and Amrita. Whereas, Rajeshwari and Ranjini plans a celebration and Amrita gets confused seeing the chaos. She ask about the ceremony, to which Ranjini taunts her and replies that it is to give peace to Chanda’s soul.

Now in the upcoming episode, Gopal will take his family to the fest. He will question Chanda that what she wants to eat? At that time they will hear an announcement about the function in Kothari mansion.

Gauri will get excited and goes along with her family to visit their palace. Meanwhile, Amrita will try to help Rajeshwari but the latter will scold her.

She will ask Amrita to handle the function and feed the poora, while the latter will go out of the palace along with Tara. Meanwhile, Gauri along with Chanda and their family will also reach there.

Will Chanda be able to meet Amrita?