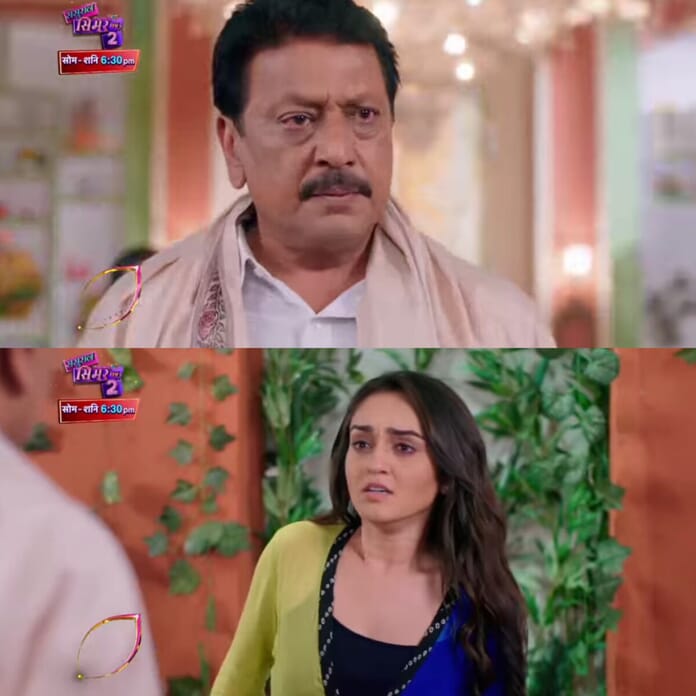 In the previous episode we have seen that Avinash came back home from hospital, Reema heard their voice and runs to them. Everyone was shocked to see Reema back home. Indu slapped her and told her how much they suffered due to her decision.
Avinash slapped her and asked to leave the house. He thrown her out of the house and told her if she would come back she will see her father dead face. Guptaji asked Griraj to keep updating him about the Simar matter. Shobha discussed with them that it would be good if Simar doesn’t leave the house, so that Geetanjali Devi wound will stay alive whenever she will see her.

Gajender reminded Aarav that he never stopped him from doing anything yet he told him that this time he was standing against Geetanjali Devi’s decision. Aarav told him that Simar is legally his wife so he wanted some time then he will legally finish this relationship by divorcing her.

And if they pressurize him more then he would left this house with Simar. Aarav told Simar to manage in this house whether she likes it or not as due to her and her sister Badi Ma faced humiliation and she was facing it.

Vivaan disgraced Chitra, Reema asked Vivaan for help. Aarav tried to convince Badi Ma for Simar and then after some time he would give her divorce but Badi Ma unconvinced with her plans and gave him tonight’s time. Aditi gave phone to Simar to talk to her parents.

In the upcoming episode we will see that Reema will blame Simar and picks her hand on her. Simar will stop Reema and will tell her that it was her decision, nobody forced her. Simar will remind Reema that Aarav is her husband now and she is Simar Aarav Oswal, so she cannot show her right on him.

Reema will be furious and will tell to Simar that now she will take revenge from her for her betrayal.

Will Simar goes back to Oswal residence?

What will Reema do to take revenge from her sister?