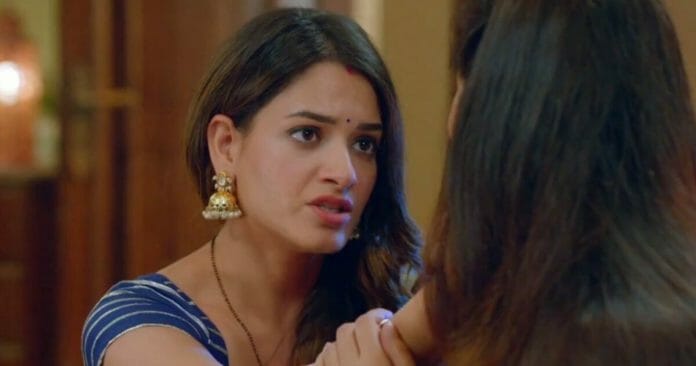 The Star Plus’s popular Television show “Sasuraal Genda Phool” is back with season two. Now the show is concentrating on Ishaan pleads with Rano to stop pressuring him to sign in divorce paper.

In the previous episode we saw; Rano demand Titlee to sign in the divorce paper and left from Ishaan’s life. Titlee shared to Rano that she got this jewels from Ishaan’s grandparents. They accepted her as their daughter in law and gave their blessings too. She will treasure their love not this jewels she returned the jewels to her. Meanwhile Shailaja teased Ishaan for being happy for Titlee. He shared to her that he don’t understand what’s going on in his life. Neither Suhana didn’t come to meet him neither he don’t feel awkward while danced with Titlee. Shailaja told him he is in love but he denied it reasoning he can’t able to betray Suhana. Shailaja asked him to sign in divorce paper and end this relationship then? Ishaan left from there answering it’s not that easy. Later Rano mocked at Titlee’s feelings and told her she won’t fall for her magic like others and left . Ishaan confronted Titlee what did mom said to her but she lied to him as nothing. Disha brought dried clothes to Shailaja’s room and found her almira open. She noticed the bangles there and wished to steal to escape from goon. She stole it and about to leave Eilesh hugged her from behind. She got scared to the core and lashed out at him. He apologized to her and left . Disha felt guilty and placed the bangles back to its place. Later Ishaan, Titlee played Ludo with Meethi and Ishika. Rano disliked it and blamed Titlee for ruining her peace.

In Today’s episode we see; Rano asks Ishaan Is he signed in the divorce papers? She warns him don’t dare to say he don’t get time to read those papers. She adds that he got enough time to go to office and play with them but not to read the papers. She questions him Is he decided to don’t divorce her or he loves her? Ishaan denies it and share to her he wanna talk with Titlee about it. Rano says that there is no need of that. He says that whether she accept it or not she is his wife. He will sign in the divorce papers when right time comes. Indar shares to Rani that he will get promotion soon but he fears to get caught when police comes for verification. Rani supports Titlee when he is talking selfish there and tell him one day he will understand how good she is? Later Rani shares her happiness to Ambarnath for accepting Titlee as their daughter in law. She requests them to make Rano understand and accept Titlee. Gayathri tells her that she too misunderstood her before now she understands her well. Soon Rano will understand her too and wins her heart. Disha gets a threatening call from Goon to pay the amount or else he will kill Golu. Later Titlee notices Ishika looking sad. She consoles her and learns what’s bothering her? She shares one plan with her to solve her issues. Ishaan gets impressed by it.

In the upcoming episode viewers will see; Rano will say to all Titlee is here. She will demand Titlee to return the jewels which she stoled. She will complaint to all mom’s bangles went missing till nothing happened like this in house. Rano will blame Titlee steal it reasoning she is a thief. Indar will agree with her and about to kick her out. Shailaja will stop him in anger.

What will happen next? Will Rano get a reality check? Will Ishaan find out whom steal the bangles?.