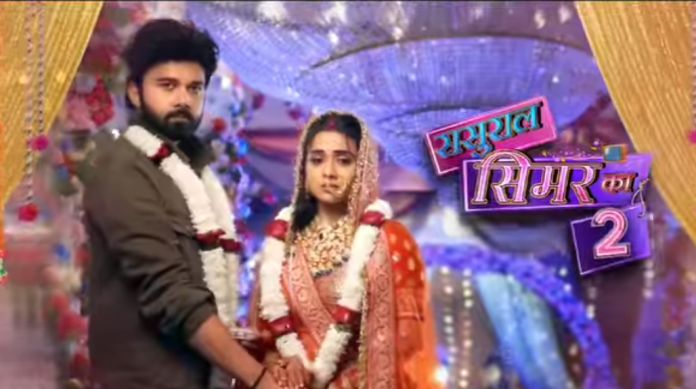 Episode starts with Reema posing stunningly in front of camera. Vivaan reaches there. The Photographer praises Reema for her wonderful performance. Vivaan and Reema leave the room and starts arguing in another room. Vivaan tries to convince her but Reema denies to understand Vivaan’s condition. They both misunderstand each other.Reema denies to take any kind of help from Vivaan, so he leaves the room with broken heart.
Araav shows templates to Simar’s ‘Saraswati Vidya Mandir’ Simar looks so happy. Araav lingers the thought of being husband of a principal of the Music school. Simar thanks Araav for supporting her. He tries to generalise the concept of supportive husband. Araav starts cardling her in his lap.
Suddenly , Chitra shouts saying ‘Vivaan’.

Simar says he is the reason behind her success. He supports her. She thanks her. Aarav says every girls should have a career. Every girl should fullfill her dream. Simar agrees with her. Simar says about Reema. Aarav says the Oswaal family together can overcome everything.

Chitra asks Vivaan about where he was. He says he went to for outing with Reema. Chitra says they both are lying. Chitra says Reema went for the shooting as she puts up the make up, and fashionable dress. Badima also asks her where she went. Reema says the true story. Chitra gets furious. Reema says that she wants to do her job whether Chitra gets angry to listen. Badimaa says he doesn’t have any problem with Reema’s dream but as remai is the daughter in law of Chitra she needs to ask permission from Chitra.

Both Chitra and Reema accuse to Vivaan for not supporting them. Vivan becomes confused. He says that he start to listen both of them. No one of Chitra and Reema is not ready to understand his situation. He becomes a sandwich between them. He doesn’t want to heart any of them but no one considers his position.

Next morning, Badima, Shandhya and Vivaan surprises Simar with a beautifully decorated music room and her students.Simar becomes awestruck to see her new students. Aarav also says that he designs the decoration. That’s why he asks the credit. She is asked to put down the Shubh Kalash. Simar thanks everyone for their support. Three of them leave the room wishing best to Simar. Simar starts her class with an explanation of the word music. Music is magic. U for universal. S for Simple. I for infinite. C for cure. She explains the interpretation of the music and explains the meaning. Everyone looks pleased with Simar’s lessons. She asks everyone to tell their names.

Suddenly she hears a cry for help. As soon as they start to introduce themselves someone just shouted calling “Mom Dad help me”. Everyone sees that Riyansh comes with injured face. He becomes senseless.