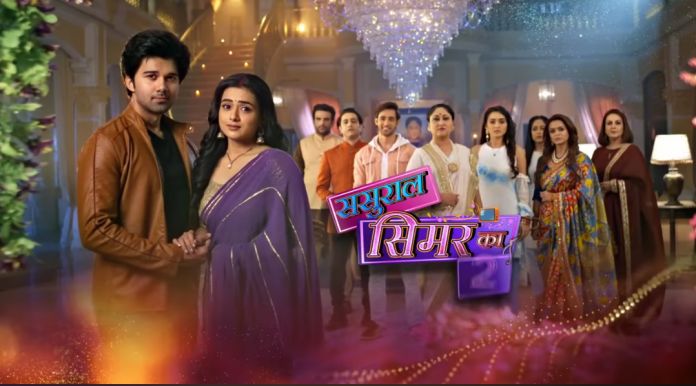 Episode starts with the sudden advent of Reyansh. Reyansh was severely injured. Everyone is tensed to see the serious situation of Riyansh. Reyansh says that he is severely injured and he wants to see the faces of his family members that’s why he reaches home in haste. And suddenly he becomes senseless. Everyone is devastated to see the situation of Riyansh. Everybody becomes busy to care him. But suddenly
Riyansh gets up and and he says he was doing prank. Everyone got it in a serious way. Ultimately everyone become happy to see him in a healthy situation. He starts singing and makes everyone happy.

Reyansh Badima as meri pyaari Bindu. Badima says him that it’s there secret pet name so he should not call her in the presence of everyone. Riyansh kisses her. He calls her again as meri pyari bindu. Riyansh stares for a moment at Kabya. Kabya also stares at him. He hugs Chitra, Sandhya and Badima one by one.

Simar asks him whether he is able to identify her. He says she is Simar. Riyansh recalls the love of Simar and Aarav. He calls Simar as an international singer. He also calls Reema as a supermodel of India. He appreciates Simar and Reema both for their encouraging career.

Giriraj asks about his present semester. He skips the issue. Badima asks whether he wants to marry or to study. But Riyansh says that he is not willing to marry now. Suddenly Badima watches a lipstick stain in his shirt. He was asked about his stain. He ignores the issue and says to Badima that it’s a stain of his own cosmetics.

Riyansh comes in the room of Vivaan. He calls her as “hot bhabi”. Vivaan forbades to call her in that way. Reema supports Riyansh call sir own husband as old school boy. Meanwhile Reyansh is so happy to come his home again.

Badima calls Simar when she was going to Riyansh’s room. Badima asks to keep a observation on Riyansh because she doubts Riyansh abour his attitude. May be she is not the individual of this modern era. But she can assume mentality of her dear and near ones.

Suddenly Vivaan checks his result. And he failed in examination. Araav also comes there. He also asks about his results. But they are asked to keep it as a secret by Riyansh. Simar says to Riyansh that you will declare your result yourself in the front of the whole family. Simar explains that the concern of the parents regarding their children and their studies so student should always express their result to parents. Aarav explains the same point and how Aarav and Vivaan started the business. Simar again asks about stain of his shirt.

Simar checks his documents and she sees that he not only failed in examination, is also rusticated from his school.
In the dinner table Riyansh is insisted to have his food.
Vivaan accuse that he doesn’t get any food from his mother. Chitra says Sandhya is his mother. Sandhya gives the food to Vivaan but Riyansh snatches it from Sandhya.

Suddenly notification of mobile rings. He becomes embarrassed.
Again Simar asks in Riyansh about the real incident. Simar tells Badima that he is rasticated. Badima says that he should get marry as soon as possible. Simar is given the responsibility about the marriage of Riyansh.
Badima wants a wife of who is suitable for Riyansh and the Oswal family.
Episode ends.