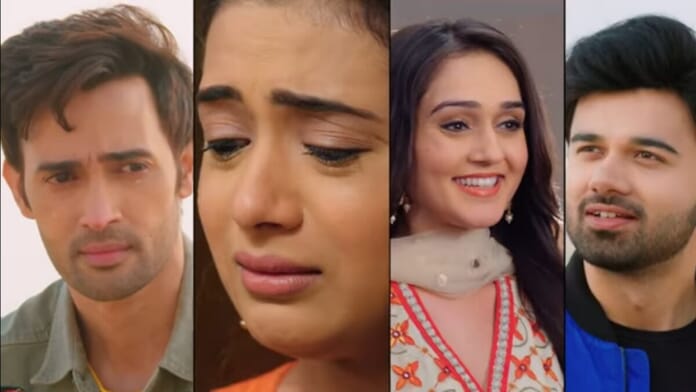 The episode starts with Aarav taking Simar to the Radio Station for recording. But Simar requesta him not to take her as she is not mentally prepared for the recording. Aarav tells her that he knows the situation is not so good, but still he ask her to do and he tells that he will try to make understand Badi Ma. Simar tells that she understands that the situation is not favourable that’s why Geetanjali Devi took such decision against her father. Other side Reema complains Vivaan that Badi Ma has worsen the situation, unless people follow her. She also tells that Badi Ma cannot dominate on us all the time. Reema tells that everything that happened to her and her family is due to Badi Ma. Vivaan scolds her that why she is understanding everything wrong. He explains that she has suffered many things in her life and he cannot tolerate her humiliation.

Aarav tells Simar to follow her passion and can go against Badi Ma as she is not going to live forever in Oswal family. Reema sees Geetanjali Devi photo and promises her that she will take revenge for her father’s humiliation and break her ego in pieces.

The senior singer Yamini Devi is leaving from radio station as she waited very long for Simar. She tells to manager that she cannot wait any more as music is a very disciplined profession. She also tells that before learning how to sing the new singers should be punctual towards there profession. She also tells that tell to Simar that it’s her first recording and she 8s so late so Yamini Devi is not going to work with her in future. They request her that they will arrange new background singer for her, so she tells them to arrange another singer and take a new date for the recording.

Aarav car gets puncture while coming to the Radio Station. Simar tells that she thinks Mata Rani also don’t want her to go for recording. Yet Aarav tells her that life always gives us opportunity just like the spare tyre in the car. He then changes the tyre, Simar asks him that she can change the tyre. He gives her to fit the tyre but it was though for her, so Aarav helps her. They both changed the tyre and spent some quality time together, they came closer to each other. After the tyre gets fit, Aarav tells her that this is Mata Rani prediction. He removes stain from Simar’s face. They both thanked each other. She taaks his permission to visit the temple.

Aarav looks for Simar, when he comes inside temple he finds Simar singing Aarti. He is mesmerized hearing her beautiful voice. She prays to Mata Rani for both her families, Aarav hears her prayer. Panditji gives them blessings and praises their love for each other and aalo ask Aarav to put Sindoor to his wife, yet Aarav leaves from there without putting Sindoor to Simar.

Aarav gets angry, tells her that he cannot do this every day. He is not sure whether he is doing right or wrong. He starts hurting himself, then Simar stops her by saying for her sake stop it. He starts bleeding, She bends down, his blood fills her maang. She comforts her that whatever has done is right and he has done many things for her.

Aarav then brings her to radio station. The manager taunts her and informs her that she lost her recording and is very unprofessional. She tells him to give her one more chance to her. The manager tells her that Yamini Devi is not ready to work with her. She is Simar’s ideal. Aarav takes Yamini Devi’s detail. Geetanjali Devi takes out an old box. She finds a photo fo her husband and his second wife, who is Yamini Devi.