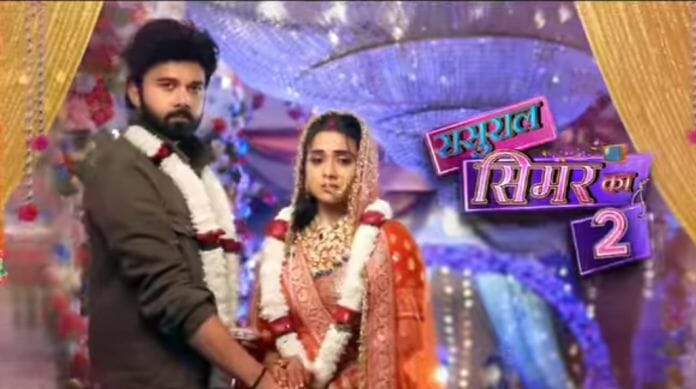 The episode starts with Sandhya said, tomorrow is the competition, now this is the situation of Simar, how would she perform? Simar starts feel ill. Vivan said, tomorrow in the Ratanlal auditorium competition will be held and this is already announced in whole Agra. How would she perform with this voice? Simars’s mother said, be calm Simar, keep faith on Matarani. She will do everything right. Geetanjali said, it’s not time to lose faith. And forget everything else. Only think about the performance.

Sandhya said, there is natural remedy which you can try, as poison can be treated with poisonous medicine, then if rock soil will be mixed up with hot water, then you might be cure. Geetanjali said, yes you are right. Reema said, I’m bringing the remedy right now. Simar drank the remedy. Everyone looks forward for her recuperation.Vivan said, we have to go in the lawn right now.

Audience are cheering up Simar. They are encouraging Simar. Then Simar says with her breaking voice, thank you all for your support. Then one audience ask, why your voice is like this? How would she sing with thiss voice! One said, she is already defeated now.

One audience came forwarding with the her encouraging voice. Simar thanked her. She said, every woman of this country should thank you as you have inspired every lady of this country. You know Simar, half of the women of this are told that their home, kitchen, in laws are everything to their life. There is nothing more. But above all these things when a lady achieves her dream, she became hero. You’re our hero. Go forwad. Become our representative. Your win become our win.

Geetanjali asks Simar, how is your health now? Gajendra suggested to withdraw her name. Simar forbade them. Sandhya said, you can’t do with this health. Geetanjali said now it’s not only your fight. It’s now every audience’s wish. Now you are their representative. We can’t sneeze their dream. We will not withdraw her name. Simar said I will accept defeat without fight. I’ll do it. Aarav said that’s the spirit. He said to vIvan to take a picture. Everyone was praying.

Show is now started. Reema said, everything will be alright.

Dhami congratulated her. Chitra said we will not win. Yamini said now she is planning for a new drama by through she will win. Do it with your own. She humiliates her. Yamini told Simran to be cautious about her respect. As after defeat, she have to leave the house. Dhami said, prepare yourself for your defeat. Simar said who cherish their win before their winning, they are fool. Yamini said, keep your attitude. Reema said let’s watch what will happen.

In the back stage, Simar was invited on the stage after 5 mintues. Geetanjali asked finally how she feels. Geetanjali forward her hand for everyone’s palm. She said this is our strength. This is the respect of our family. Forget about the result. When you will sing, only think about that time. Sing your best. Sing for your own soul. Live that moment. Forget about the win and defeat. Forget about the shame. Not sing as Simar Aarav Oswal, do it with your own soul. This will be your own. Your whole family is with you. Everyone forwards for the stage.

Anchor is greeting every audience. This competition will be judged by Ustadji. Yamini is asked to come to the stage. She greeted everyone. Anchor said, on the opposite, there is a disciple of Yamini, will she win? Simar hesitated to go. Anchor asked her, is she accepting her defeat? Aarav gave  the support and give her a auspicious food. She felt better. Everyone was clapping. Simar came on the stage. And Simar greeted Yamini. Anchor asked everyone to keep silence.

Anchor said the competition will be held in three rounds. First round, solo round. Second round, instrumental round. Third round, will be collaborating round. First round of competition starts. Simar was asked to start first. Simar looks tensed. Aarav came on the stage and said to sing from her soul. I’m with you.