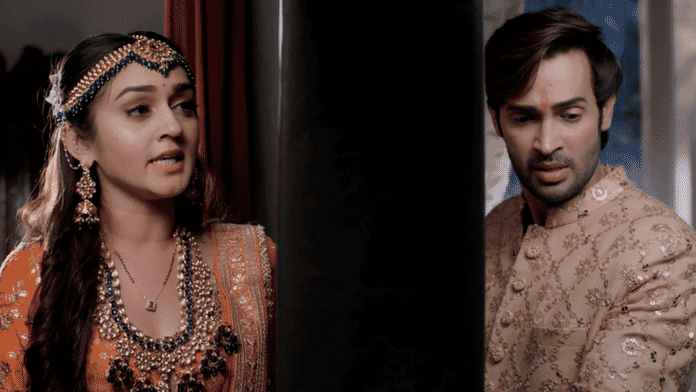 In the previous episode we have seen that Narayan family tried to open Avinash door, to which he told them that he was fine and just wanted some time alone. Gagan told that Geetanjali Devi deserved what she was suffering, Reema’s decision was good. Lalit stopped him from speaking against Geetanjali Devi as she was his grandmother.
Indu doubted her upbringing. Aarav bandage Simar and asked her to eat something. Simar told that her sister and Vivaan also didn’t eat anything so how could she? Sandhya told her that she understands her condition but things are not under her control.

Vivaan heard Reema’s voice he comforts her and told her that walls cannot separate their love and people have to accept their marriage. Gagan called Simar and told him about Avinash, Simar urged to come home. But Gagan stopped her and told her to take care of Reema.

Avinash then opened his door and informed his family not to take Reema’s name in his house as she was dead for him. Aarav requested Badi Ma to talk with Vivaan to which she threatened him that to tell Vivaan to leave Reema or else she will leave her some where.

Aditi was very disappointed with Badi Ma decision, Simar tried to console her. Griraj asked Chitra to find solution to the situation of Geetanjali Devi and Guptaji. She told she already have one solution related to Reema.

In the upcoming episode we will see that Simar will tell Reema that nobody will lock you in room now. She will take her down Android will give her hand in Vivaan’s hand infront of whole Oswal family. Geetanjali Devi will be shocked to this.

What will Chitra plan for Reema to get rid of her?

What will Geetanjali Devi do to her family now?

Will Simar stay after completing one month in Oswal family?