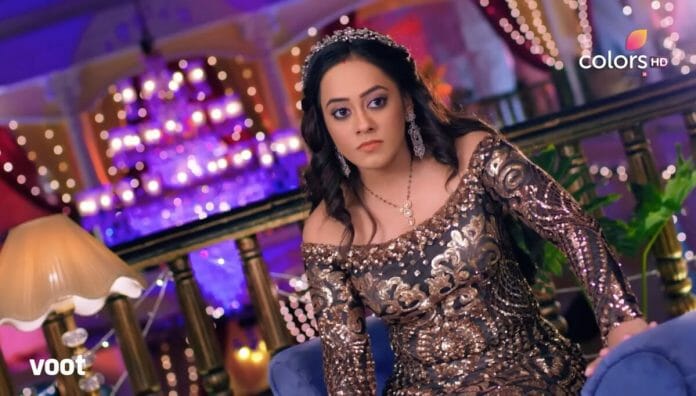 In the previous episode, we saw Simar tells Dhami that today is a very special day for her and Aarav so she should not do any tamasha today. She thanks Dhami as she has prepared the house very well. Dhami is about to answer Simar but Aarav interrupts her and takes Simar away. Further, Vivaan and the housekeepers make Dhami sit at a place. Vivaan tells Dhami to keep sitting here. Vivaan asks Maharaj ji to take care of Dhami. Later Geetanjali introduces Simar to everyone. Reema comes to Geetanjali and asks her to play music. Geetanjali refuses to do so. Reema says that they should do this to teach Dhami a lesson. Geetanjali agrees with her point. Geetanjali plays a song for Simar and Aarav.

Dhami says that this is her and Aarav’s song. Geetanjali tells Aarav and Simar that she wants to see them dance. Dhami says that Aarav cannot dance with anyone else on this song except her. She sees Simar and Aarav dancing with each other and gets infuriated. Later Dhami goes to her room and takes the knife. She says that only she can dance with Aarav. Gajendra tells Sandhya that she always wanted to dance with him, so does she want to take advantage of this opportunity today. Sandhya smiles. She dances with Gajendra. Geetanjali gets happy seeing her family happy. Dhami is coming towards them. Vivaan asks the servants to keep the camera on. Further Dhami comes there and stabs Simar with a knife.

In the upcoming episode we will see that Dhami will come to Simar. She will stab her. Simar will get injured. She will faint. Aarav will ask her to open her eyes. While Dhami will smirk.

What will happen next? What will Aarav do now?