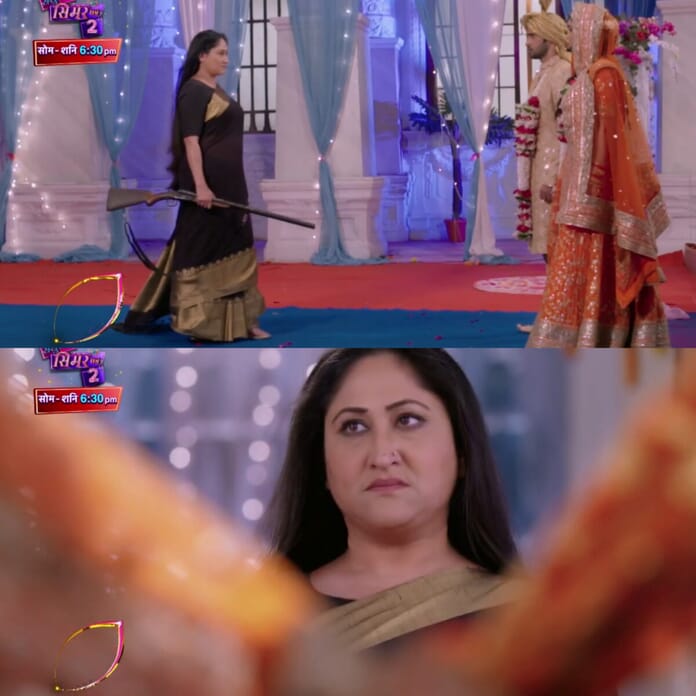 In the previous episode we have seen that Geetanjali Devi told that she had to show the world her tempest appearance for the second time. She took a red cloth wrapped thing from her wardrobe, it’s a gun. She holded it and told that this time she was not going to miss it.
Aarav went running behind Geetanjali Devi. Chitra taunted Simar that one sister came hiding her face and another came showing her face. Indu was crying, Roma consoled her. Lalit apologized to Indu for his family behaviour.

Lalit noticed that Avinash was locked in his room, they all rushed to him but he didn’t open his door. He was traumatized. Geetanjali Devi kept on thinking about her humiliation. Vivaan and Reema reached home. Reema told Vivaan that she was not scared, if the family was angry today then tomorrow they will accept their relationship.

Sandhya asked Simar to stop them coming home as Badi Ma was furious and it will be detrimental for them. Aarav and Gajender went on knocking Badi Ma’s room. Simar asked Vivaan to not enter the house. Geetanjali Devi came out of her room in her tempest appearance with gun in her hand.

She came down towards Vivaan and Reema, the whole family followed her. Vivaan told Simar that he understands Badi Ma very well, but today or tomorrow they have to face her. Ahead both entered the house. Geetanjali Devi in her tempest appearance stood infront of them with the gun in her hand and anger on her face.

In the upcoming episode we will see that Geetanjali Devi will keep the gun infront of Reema, Simar will come from behind her and will stand infront of Reema to save her.
Still Geetanjali Devi will not stop she will fire the gun but meanwhile Aarav will pull the gun towards up, so when it fires it will break the chandelier and the chandelier will fall down hurting Simar’s hand.

Will Simar be hurt by the chandelier?

Will Aarav and Simar get divorce?