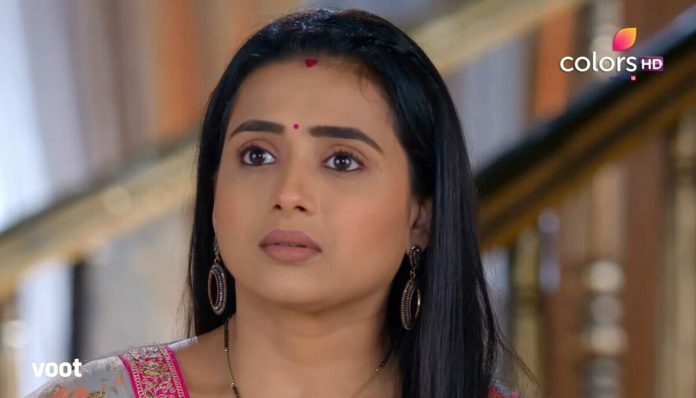 In today’s episode, Simar says to Aaditi how lucky and blessed she is to have a husband like Vivaan. After their entry, Aaditi and Sandhya insist Simar to make some delicious food Aditi.

Simar comes to the kitchen when Ishita acts to be innocent and insists to perform her first rasui. Simar and Chitra decide to make some poha for Aditi. In the absence of Simar, Ishita mixes some poisonous plant to the cutting onions.

Simar says she will do it by herself. Meanwhile, Riyansh is assured to join the office by Aarav and Vivaan. Reema becomes more vexed with her dreams. Everyone joins the dinning table to have the first rasui.

At first Badima disagrees to take the food, but when they go finally to take foods, suddenly Kappor family comes and asks Ishita to serve them also. Ishita is in quandary.

In the next episode, Ishita would hesitate to serve the food to her parents. But everyone would insist to do so. She would throw the dish of the food in floor due to her anger. Mr Kapoor would slap her and Badima would insult for her mischievousness.

Later Simar would confront Ishita for her conspiracy to harm Aditi. At first Riyansh would blame Simar for everything, but Simar would show the video of the incident which was recorded secretly.

Riyansh would lose his temper and would rebuke Ishita for her meanness. Simar would promise Ishita that oneday she would turn her out a good version of herself. Chitra would insist Riyansh to hold the power of the chair in the oswal office. Later she would also insist Ishita to perticipate in Aditi’s pregnancy announcement ritual.

What would happen in Aditi’s function? Would Reema and Vivaan come closer again?
Keep following this space for more information about your favourite shows